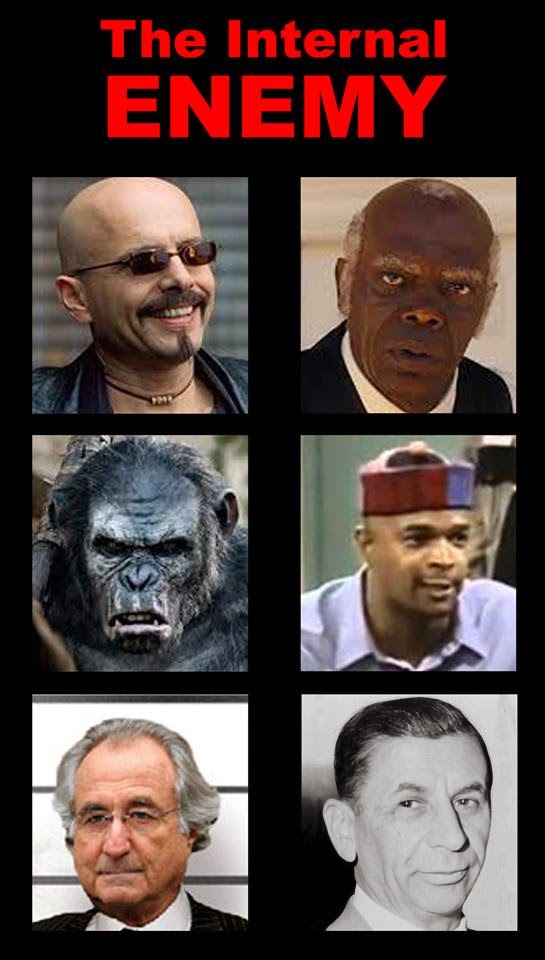 1.) Cypher from The Matrix represents the guy that prefers to live in the old conditions that the group is struggling to free themselves from. He will betray you to prevent your mission from being successful.

2.) Stephen from Django Unchained represents the guy that loves the enemy, has gained their trust, and actually considers himself one of them. He can easily pass as a member of the group, but he is actually proudly one of the external enemy, and actively hates and resents the group.

3.) Koba from Rise of the Planet of the Apes represents the guy that has nothing to lose, and wants to lead the group into a suicidal attack on the enemy, even though such actions will definitely lead to the group's extinction. Koba doesn't give a shit though.

4.) Damon Wayan's In Living Color character represents the guy that thinks he's smart, but is dumb as a stone. Often charismatic, he distracts the gullible members of the group from the real issues with his fake "deep" bullshit.

5.) Bernie Madoff represents the ever-present criminal element. The very epitome of selfishness, the only thing the dedicated criminal cares about more than his own material needs, is his extremely risky plan to achieve them at your expense.

6.) Meyer Lansky represents the guy – with his infamous betrayal of Lucky Luciano – the outsider who lives among you, pretending to care about everything you care about, but only hangs out with you so that he can take advantage of opportunities that you present for the benefit of his own group alone. He will cut your throat and get rid of you the second you are no longer useful to him, so he can rewrite history and pretend everything he got from you, originated from him.
Posted by M. Rasheed at 9:38 AM