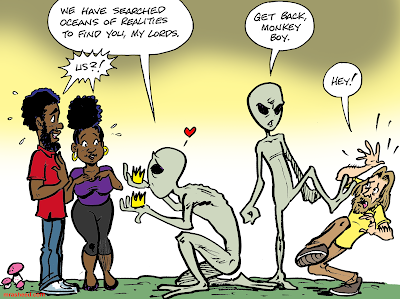 Q: What do you think aliens would think about the relationship between white and colored (all the other races of) people on this planet?

Muhammad Rasheed - Remember in The Matrix film, when Agent Smith explained his theory of humans being a virus? That’s how an advanced extraterrestrial species would see the dominant white culture and their anti-Black systemic racism. They would be genuinely disgusted with the sheer amount of cruel greed it takes—over generations!—to infest human society with the filth of the White Supremacist Ideology, and the equally destructive ecology-destroying mega-corporate cronyism evils that branched off from it. 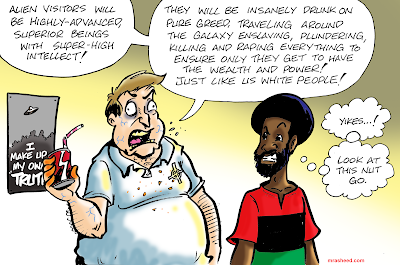 Despite the barbaric and psychopathic nature of how the great wealth of Western Civilization was amassed, the architects and maintainers of the White Supremacist Ideology have somehow convinced themselves that modern society IS “highly-advanced.” As if lots of money—however way it was acquired and maintained—automatically means you are “superior” and “high-level.” Because of this, the Average Joe is falsely under the impression that any advanced alien species will be exactly how the savage, warmongering European colonialists were. Should the actual advanced intelligence show up, Average Joe will get his racist feelings crushed, and will commit group suicide rather than deal with the interplanetary humiliations galore. 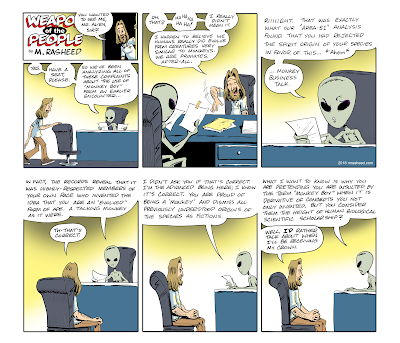 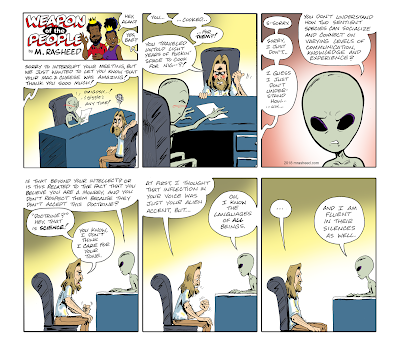 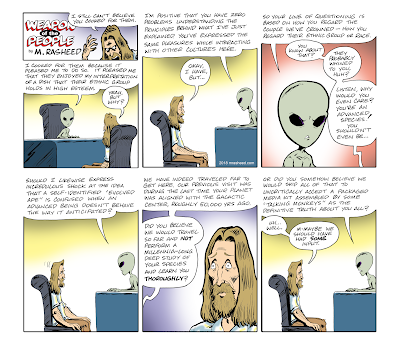 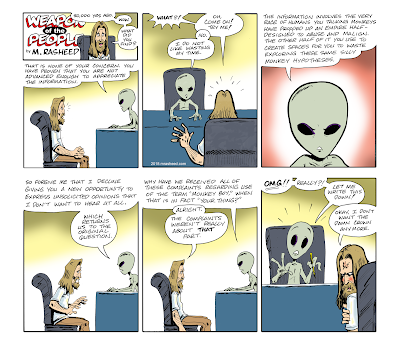 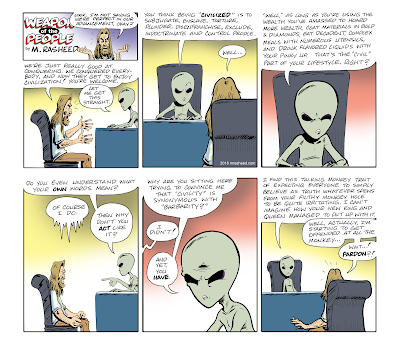 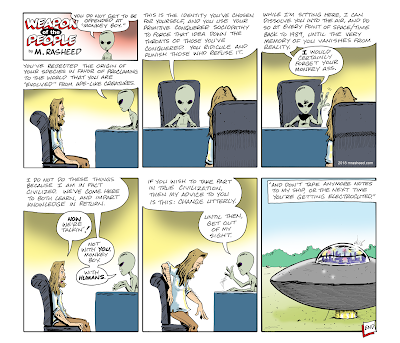 Riaan van Niekerk - Could possibly be.

Muhammad Rasheed - In the Qur'an, God refers to Himself as "Lord of all the worlds," so I'll be straight. It's the folk who think the earth is only 6,000 yrs old who'll have the issues.

Omar Diaz - Or that we came from monkeys...

Muhammad Rasheed - I'm sure the evolutionists will pull some kind of spin out of their butts, until the aliens confirm that melanin is friggin' AWESOME. Then they'll declare war on the aliens and pretend they are an invading force.

They'd rather destroy the whole planet than deal with THAT shit. lol

Omar Diaz - You're absolutely right. Funny enough, people of faiths will be more accepting of alien life than evolutionists and agnostics. #teamaliens

Muhammad Rasheed - White people invented the concept of "humans evolved from an ape-like common ancestor" and labeled humans "primates."  Obviously they WANT to be monkeys, so how is it racist that I call them what they want to be again?

Matt McKinney - If humans evolved from monkeys, that means that white and black people evolved too. But in this comic, the black people are shown to be KINGZ while white people are attacked and name-called. It’s not hard to admit your prejudice!

Muhammad Rasheed - Humans didn't evolve from monkeys. Whites invented the concept because they wanted to separate themselves from the Book of Genesis origins of the species. They're the ones that want to be monkeys, so I called them that in the cartoon. So how am I being racist?

Matt McKinney - Well you also admit in one of your other comics that it’s ok to hate white people, because they’re the ones who are “systematically oppressing you”

Muhammad Rasheed - lol Are you actually equating white people with white supremacy? Because the latter is the only thing that deserves hatred. Is this what you are admitting in public? That they are in fact one and the same? Tell me.

Matt McKinney - How is there white supremacy exactly? Cause so far, all I’ve seen white people being seen as a negative trait by the media and racists cartoonists like you

Muhammad Rasheed‏ - All that means, Matt, is that you haven't studied the topic. You believe political talking points are the alpha-n-omega of the issue.

Matt McKinney - Yeah I haven’t studied enough books that tell I’m the devil for being white. And that everything is my fault. I should really catch up on that

Muhammad Rasheed‏ - Admitting to the deficiency is the first step in curing it.

Matt McKinney - I haven't done anything to any person whatsoever based on their skin color. It's racist to assume that all members of one singular race are responsible for everything wrong with your life. "It's all the whites fault!" It's all the blacks fault!" It's the same shit.

Muhammad Rasheed‏ - Matt, it's clear that you have done no research into this subject to even know what the facts are, so your attempts to shut down the people who are read up on the topic absolutely contribute to a white supremacist culture. I'm genuinely sorry to see you gaslighting. It's racist.

Matt McKinney - You really don’t have anything to say

Muhammad Rasheed‏ - Oh, is THAT why you're doing all of this triggered trolling on my Tweets? Because I'm NOT saying anything. #SeemsLegit

Muhammad Rasheed‏ - Especially once they admit in a public forum that they are unlearned on the topic of discussion, while passionately opinionated about it from a base of willful ignorance. That's the tool kit racist trolls often bring with them.