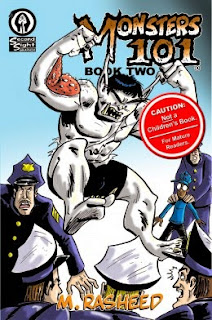 
the three cents:
Having gone "From Bully to Monster" in Book One of this graphic novel series, the young Willy Pugg has now fully transformed into monstrous Pugroff, and with a debt owed to a dead friend he's finding himself walking the straight and narrow. Or trying to anyways, as old habits die hard. With fellow classmate and brainiac prodigy Mort willing to help Pugroff find a way to continue some kind of life, the two are soon pulled into some of that crazy old misadventure stuff that makes Monsters 101 an especially fun premise. Rasheed's pacing has evolved quite well since the last issue, with the story opening up some day after the previous events and the narrative pulled back to show the whole town of Simline trying to cope with whatever that disaster was that led to the violent deaths of so many local children. Mort stealing food for his new friend is a great symbol of their bonding. Throw in Britain's favorite superhero, the Red Shield, hot on the case of a missing heir and the plot thickens. Rasheed's spin on super-heroism is fun here, as the Red Shield's background is shown enough to reveal that heroes are rarely the pinnacles of respectable excellence we hold them up to be. This plays along intuitively with Pugroff's attempts at reformation incredibly well. Of course without the presence of any other monsters, the British hero and the Simline police department all seem to presume that Pugroff is the one responsible for the missing and dead children, thereby leading through pages of fisticuffs and sound effects. Eventually, the two real heroes have no other choice but to flee, hiding out in another dimension. From here on the story goes deep into fantasy territory, with many smart, interesting observations along the way. Take for example, this line spoken by Kyslo the Devil (not demon!)..."I'd always heard that humans were made of clay! That's why they make the best shape-shifters!" Rasheed is putting some thought into his characters and settings, even if his visual presentation continues to sell a softer message. This, I still believe, is a decision on his part to show how the lives of children can be so much more complicated than they may at first appear. His style is more pronounced here as well, with stances from the slugfests calling forth some of the wackier Jack Kirby and John Buscema action sequences of the 1970s. Many more characters are introduced, and the world is expanded upon tremendously so. I like this comic because its imagination really gives it a distinct uniqueness, with very little homogeneity ever called to mind. Too many comic books (or stories from any medium, truthfully) one can delve through and easily pick up the homages, the inspirations, the swipes. Not Monsters 101. Rasheed is taking his characters somewhere else entirely.