Of a Marriagable Age: Aisha, Mother of the Faithful 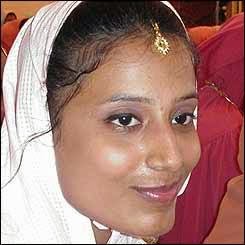 In the booklet Prophet of Islam, which was later incorporated in 1948 as the first chapter of his book Living Thoughts of the Prophet Muhammad, Maulana Muhammad Ali writes in a lengthy footnote as follows:

"A great misconception prevails as to the age at which Aisha was taken in marriage by the Prophet. Ibn Sa'd has stated in the Tabaqat that when Abu Bakr [father of Aisha] was approached on behalf of the Holy Prophet, he replied that the girl had already been betrothed to Jubair, and that he would have to settle the matter first with him. This shows that Aisha must have been approaching majority at the time. Again, the Isaba, speaking of the Prophet's daughter Fatima, says that she was born five years before the Call and was about five years older than Aisha. This shows that Aisha must have been about ten years at the time of her betrothal to the Prophet, and not six years as she is generally supposed to be. This is further borne out by the fact that Aisha herself is reported to have stated that when the chapter [of the Holy Quran] entitled The Moon, the fifty-fourth chapter, was revealed, she was a girl playing about and remembered certain verses then revealed. Now the fifty-fourth chapter was undoubtedly revealed before the sixth year of the Call. All these considerations point to but one conclusion, viz., that Aisha could not have been less than ten years of age at the time of her nikah, which was virtually only a betrothal. And there is one report in the Tabaqat that Aisha was nine years of age at the time of nikah. Again it is a fact admitted on all hands that the nikah of Aisha took place in the tenth year of the Call in the month of Shawwal, while there is also preponderance of evidence as to the consummation of her marriage taking place in the second year of Hijra in the same month, which shows that full five years had elapsed between the nikah and the consummation. Hence there is not the least doubt that Aisha was at least nine or ten years of age at the time of betrothal, and fourteen or fifteen years at the time of marriage.

"To facilitate understanding dates of these events, please note that it was in the tenth year of the Call, i.e. the tenth year after the Holy Prophet Muhammad received his calling from God to his mission of prophethood, that his wife Khadija passed away, and the approach was made to Abu Bakr for the hand of his daughter Aisha. The hijra or emigration of the Holy Prophet to Madina took place three years later, and Aisha came to the household of the Holy Prophet in the second year after hijra. So if Aisha was born in the year of the Call, she would be ten years old at the time of the nikah and fifteen years old at the time of the consummation of the marriage.

[1]: Most of these narratives are reported only by Hisham ibn `urwah reporting on the authority of his father. An event as well known as the one being reported, should logically have been reported by more people than just one, two or three.

[2]:It is quite strange that no one from Medinah, where Hisham ibn `urwah lived the first seventy one years of his life has narrated the event, even though in Medinah his pupils included people as well known as Malik ibn Anas. All the narratives of this event have been reported by narrators from Iraq, where Hisham is reported to have had shifted after living in Medinah for seventy one years.

[3]:Tehzibu'l-tehzib, one of the most well known books on the life and reliability of the narrators of the traditions of the Prophet (pbuh) reports that according to Yaqub ibn Shaibah: "narratives reported by Hisham are reliable except those that are reported through the people of Iraq". It further states that Malik ibn Anas objected on those narratives of Hisham which were reported through people of Iraq. (vol 11, pg 48 - 51)

[4]:Mizanu'l-ai`tidal, another book on the narrators of the traditions of the Prophet (pbuh) reports that when he was old, Hisham's memory suffered quite badly. (vol 4, pg 301 - 302)

[5]:According to the generally accepted tradition, Ayesha (ra) was born about eight years before Hijrah. But according to another narrative in Bukhari (kitabu'l-tafseer) Ayesha (ra) is reported to have said that at the time Surah Al-Qamar, the 54th chapter of the Qur'an, was revealed, "I was a young girl". The 54th surah of the Qur'an was revealed nine years before Hijrah. According to this tradition, Ayesha (ra) had not only been born before the revelation of the referred surah, but was actually a young girl (jariyah), not an infant (sibyah) at that time. Obviously, if this narrative is held to be true, it is in clear contradiction with the narratives reported by Hisham ibn `urwah. I see absolutely no reason that after the comments of the experts on the narratives of Hisham ibn `urwah, why we should not accept this narrative to be more accurate.

[8]:Tabari in his treatise on Islamic history, while mentioning Abu Bakr (ra) reports that Abu Bakr had four children and all four were born during the Jahiliyyah -- the pre Islamic period. Obviously, if Ayesha (ra) was born in the period of jahiliyyah, she could not have been less than 14 years in 1 AH -- the time she most likely got married.

[10]:Tabari has also reported that at the time Abu Bakr planned on migrating to Habshah (8 years before Hijrah), he went to Mut`am -- with whose son Ayesha (ra) was engaged -- and asked him to take Ayesha (ra) in his house as his son's wife. Mut`am refused, because Abu Bakr had embraced Islam, and subsequently his son divorced Ayesha (ra). Now, if Ayesha (ra) was only seven years old at the time of her marriage, she could not have been born at the time Abu Bakr decided on migrating to Habshah. On the basis of this report it seems only reasonable to assume that Ayesha (ra) had not only been born 8 years before hijrah, but was also a young lady, quite prepared for marriage.

[11]:According to a narrative reported by Ahmad ibn Hanbal, after the death of Khadijah (ra), when Khaulah (ra) came to the Prophet (pbuh) advising him to marry again, the Prophet (pbuh) asked her regarding the choices she had in her mind. Khaulah said: "You can marry a virgin (bikr) or a woman who has already been married (thayyib)". When the Prophet (pbuh) asked about who the virgin was, Khaulah proposed Ayesha's (ra) name. All those who know the Arabic language, are aware that the word "bikr" in the Arabic language is not used for an immature nine year old girl. The correct word for a young playful girl, as stated earlier is "Jariyah". "Bikr" on the other hand, is used for an unmarried lady, and obviously a nine year old is not a "lady".

These are some of the major points that go against accepting the commonly known narrative regarding Ayesha's (ra) age at the time of her marriage.

Neither was it an Arab tradition to give away girls in marriage at an age as young as nine or ten years, nor did the Prophet (pbuh) marry Ayesha (ra) at such a young age. The people of Arabia did not object to this marriage, because it never happened in the manner it has been narrated. 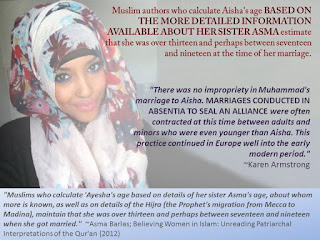