BOOK REVIEW - The Devil's Delusion: Atheism and Its Scientific Pretensions by David Berlinski 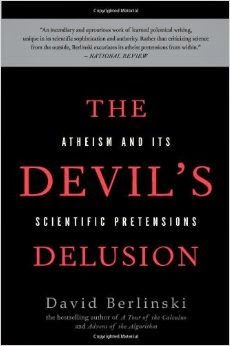 Muhammad Rasheed - I first became aware of this book when I happened to come across a brief interview clip in which mathematician, philosopher, and author David Berlinski impressed me with his casual intelligence, high wit, and thorough understanding of major scientific principles. I looked him up to see if he was published and found the Wiki article describing The Devil's Delusion. Considering himself a "secular Jew," this book represents the author's gift to the theist community... a `freebie,' if you will... and for those who are not entrenched inside the scientific community to know all the dirty little secrets. Those secrets are no less than all the reasons the favored theories supported by atheist scientists lack exactly what they need to be the `factual truths' they present them to be in public. Even though he is not a religious man, Berlinski's motivation as a very learned man, is his annoyance with the atheist scientists who have pretty much derailed scientific progress - especially in theoretical physics - by focusing ridiculously on attempts to "debunk God." He regards this as the main reason why there haven't been any great scientific personages to emerge since the passing of the last... Richard Feynman.


One of the reference sites listed at the bottom of the Wiki article, took me to a James Randi message board thread, where one of the member skeptics had posted a review he found of Berlinski's book that described it as a praise-worthy thumb in the eye of the atheist-scientific community. Obviously the forum member posted the review highlights to give the other members the opportunity to rip into it. Interestingly, none of the comments under it addressed the actual content, but instead reserved their vitriol towards calling the author a `crank' and taking childish pot shots at the idea of his critique against the `truth' of their pet theories. I recognized the signs of an actual strong argument when I saw it (if they could've ripped into his content, then of course they would have), and immediately clicked over to Amazon to purchase the book for myself.

And my! Did it deliver! Berlinski elegantly describes both the strengths and weaknesses of the atheist scientists' favorite arguments, revealing exactly what they have, and what they don't have that they actually need in order for them to actually be able to `free us from the crutch of God' as is their futile dream. He reads all of the scientific journals, and stays up on their publishing, and recognizes and notes when they admit that their hand isn't as strong as they pretend.

Thank you, David, for this most excellent gift. [salute]

Anonymous - MRasheed wrote: "who have pretty much derailed scientific progress - especially in theoretical physics - by focusing ridiculously on attempts to "debunk God.""

That would be a stupid waste of time of course. Perhaps Berlinski is simply wrong about this.

MRasheed wrote: "I recognized the signs of an actual strong argument when I saw it"

It's possible of course. Why don't you read it and test the strength of his argument?

Anonymous wrote: "I doubt it."

What is your doubt based on? Do you know me? I see that you are hiding behind your 'anonymous' mask.

You should read the book. He knows evolution theory. Its ends and outs, its strengths and weaknesses, what it has and what it doesn't have... straight from the horse's mouth. Your 'hilariously stupid' comment is a blind faith statement. If you don't know the strength of his argument by virtue of never having read the book, then what are you basing your comments on?

Read the book first, and then come back and trade with me.

Of course not. It's true that I "trust" real scientists rather than Berlinski. But that's based on experience, not "blind trust".

Nah. Life is too short to waste any of it in that manner.

I can read some of the 1-star reviews and that's enough for me.

"Berlinski begins talking about how immorality will invariably ensue if there is no creator to give us objective moral fiats."

"Berlinski argues out of this one by - get this - asserting that god is in need of no explanation and need not have a cause."

"Berlinski argues that as humans and apes are qualitatively different - and by a large amount - then evolution could not explain this leap."

"What I found instead was an author that simply reposits a 'god of the gaps' strategy, suggesting that as science cannot explain x, god is a better explanation."

Muhammad Rasheed - The fact that Berlinski is actually critical of the 'God of the Gaps' concept in the book, completely at odds with what that reviewer said, is a picture perfect example of why you should read the book and see what the author's argument actually is, and then develop your counter from there.

Other readers obviously come away with their own interpretations based on how they are moved (and their intellect level as in that case). Berlinski's argument is stronger than their short-hand that often misses the mark.

Anonymous – MRasheed wrote: "Berlinski's argument is stronger than their short-hand that often misses the mark."

Hilarious. It seems you have written a "review" and not bothered to state even ONE so-called "argument".

There are 33 1-star reviews. They all seem to think that Berlinski has NO arguments.

Muhammad Rasheed - Obviously you are clumsily trying to get me to do the work for you, as atheists are generally too lazy to read the source material from opposing viewpoints themselves. Instead you may continue to sit within your narrow-minded viewpoint and avoid the arguments that challenge it.

Anonymous – MRasheed wrote: "Obviously you are clumsily trying to get me to do the work for you"

Nah. I am here just to laugh at you. If you wanted to give even one "example" of an "argument", that would be quite funny.

MRasheed wrote: "atheists are generally too lazy to read the source material from opposing viewpoints"

Hilarious. There's really not much point to reading this anti-evolution nonsense.

MRasheed wrote: "within your narrow-minded viewpoint"

Hilarious. My viewpoint is "science is the ONLY way to understand reality". Religion and philosophy are simply useless.

MRasheed wrote: "avoid the arguments that challenge it"

Hilarious. There are NO arguments by Berlinski that challenge science.

Hilarious. It's not just me - it's the scientific establishment.

Muhammad Rasheed - You enthusiastically express a narrow-minded viewpoint, refuse to read Berlinski's arguments so you'll know what they are, proclaim that he has no arguments, and then say that YOU are here to laugh at ME.

Anonymous - It would seem that this reviewer claims to have read this book of nonsense […] So, just as I suspected, there is nothing new here of course.”

Muhammad Rasheed - "...if the author believes that, why isn't he a religious believer himself? This, of course, is never addressed."

He 100% addressed it. You see the danger inherent in spoonfeeding yourself someone's else's argument like a card-carrying sheeple, instead of reading the work and thinking for yourself?

Anonymous wrote: "That does not sound like an argument to me."

Then why don't you try reading the book for yourself, and then finding the arguments that Berlinski actually makes and clumsily attempt to refute those instead? Don't tell me, I know why: Because atheists love avoiding research of source texts so they can come to their own conclusions about things, and prefer to regurgitate other atheists' cherry-picked vitriol while pretending they have a great love for learning, logic and reason.

I LOVE arguing these points put together by the author, and have personally discovered to my sadistic great pleasure that your team has NOTHING to refute it with... just as Berlinski said. You may consider this an official challenge from me to you. Read the book, take notes, research to find facts that prove Berlinski is incorrect, and come back and face me. I am currently unmoved by your troll-like foolishness.


Get back to me when you are actually serious and decide to read this thing, Anon.
Posted by M. Rasheed at 8:27 AM