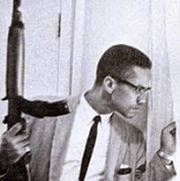 It's pretty clear that they want me to just lie there on the ground and take their abuse; don't resist as they put that noose around my neck and drag me through the back roads hanging off of their F-150. Anyone that tells me not to just take it and fight back is a villain to them. I have a serious problem with that. That's why they keep associating Malcolm with Magneto. They hate the idea of me resisting their psychopathic abuse. HATE IT.

Can you not see what's wrong with that? You know you would fight back if someone did all of that to you. Why is it not okay for me to fight you back when you are at your craziest? Is it because you consider me the Bad Guy whether I'm fighting back or not?

What's WRONG with you???

Muhammad Rasheed - I think my favorite part is whenever I post up a status that specifically asks black people a question, every white guy I know practically breaks his arm off trying to hurry and offer up his 2-cents, but there's crickets under THIS status.

Muhammad Rasheed - I just want to understand it. Was MLK's version of defending himself (by stopping punches with his face) more comfortable to you?

Brett Barton - I got opinions. I'm still on the Ray Rice arguments.

Muhammad Rasheed - "Fight us BACK?! Now see here, Mr. X... you're going a little overboard. We don't like all of this talk of you trying to stir up the Nigras like they have the right to treat us like they are equals. No, no, no. That's devil talk. You must be some kind of villain like in the funny books."

Brett Barton - I'm confused. You definitely had that ready to paste at any response

Muhammad Rasheed - That wasn't a response.

Muhammad Rasheed - What does Rice's drunken domestic abuse have to do with this topic?

Brett Barton - Nothing really. I'm usually the token responding white guy. I've been on that.

Muhammad Rasheed - I was still inside of my own head with that monologue.

Muhammad Rasheed - In fact, you've been kind of ghost lately. I assumed caught up in family stuff.

Brett Barton - About Malcolm in the middle. I agree with the fight back. Black, white, indifferent.

A few exceptions apply. Which kinda brings Ray Rice back into the conversation.

Muhammad Rasheed - Brett Barton wrote: "I agree with the fight back. A few exceptions apply. Which kinda brings Ray Rice back into the conversation."

You agree with blacks fighting back when attacked by whites, but with a few exceptions that are linked to the Rice controversy? At this point... in an attempt to connect these dots... it seems like you are saying black men shouldn't fight back if attacked by their white female fiances.

Brett Barton - Not at all.

Defend yourself if you are in danger.

I'm fairly sure a large man can detain a woman without punching her out Mike Tyson style.

She didn't have a knife or frying pan and couldn't really inflict any more than surface level damage.

Muhammad Rasheed - He was a drunk asshole. That's both the long and short of it. I'm not interested in team sports, in football, nor in domestic abuse -- that's why my Timeline was absent of any mention of that topic. My bottom line? "Don't domestically abuse each other and keep your hands to yourselves." It still functions as a distraction from the status post and is irritating me.

Brett Barton - So I won?

I was already irritated when I came across Ben's Malcolm X comment.

Tell me your opinion of his comment, please. How does that stance fall on you? Can you provide some insight into his opinion's source?

Brett Barton - Encouraging someone to defends oneself isn't the same as kill the other person.

Malcolm had the right thought process in you let then treat you like shit that is what you will be to them.

Tami Bhuiyan - Ladies, chill. Malcolm X did not say one race was better than another's ~ and what exactly are y'all tryna prove here? You're both pretty, now CHILLAX...there is no glory in trying to bring another down.

Muhammad Rasheed - I told Ben that he invented that idea, but obviously I was being facetious. Malcolm is usually treated like a villain by your greater demographic, Brett, hence the Magneto thing. My opinion as to why they do it is two fold:

2.) Similar to what Mike expressed regarding the Ferguson case in the 'Treating the Symptom' Note below, whites have culturally made up their mind about who they considered Malcolm X was a long time ago, and only reinforce that opinion over and over and over... like a Japanese sword maker folding over that metal continuously... and nothing will break it. They decided he was a bad guy villain way back when he was still in the NOI under Elijah, and that's where they see him even today, based purely on generational word of mouth passed down. No different than how all of their favorite stereotype jokes get passed along, reinforcing their extremely narrow views of other people and concepts.

This is the opinion of the matter I've been holding on to by virtue of lacking anything closer to truth to replace it with. Basically I'm inviting an opportunity to have the discussion to give me a deeper insight into the matter, assuming one should so exist.

Calm down. Tami is in Australia. That's probably the toxins talking.

Muhammad Rasheed - Tami Bhuiyan wrote: "Malcolm X did not say one race was better than another's ~"

This was even further off topic than the Ray Rice thing. She was probably bitten by a taipan.

Ricky Mujica - One thing's for sure, when Malcolm X told people to "Defend themselves by any means necessary", and when black people began to shoot back, the lawn cross burnings came to a sudden halt.

Muhammad Rasheed - "How DARE they shoot back at us??? What has the world come to? That red Nigra has to GO!!!"

Muhammad Rasheed - "Get Hoover on the phone!"

Brett Barton - Maybe I am open minded, which is strange because..... Well... I'm white and from the south.

I think the greater "fear" is people of different "color" so stigmas and fear inserts itself into the thought process before logic.

Muhammad Rasheed - Expound on that a little further, please.

Ricky Mujica - Except that in this country, the media perpetuates an irrational fear of the big black male. The news pounds us with that fear constantly. That is why police will shoot a black man with toy gun in a toy store, but is OK with a bunch of white guys carrying submachine guns into a local Chilis.

Muhammad Rasheed - "When we get off our shift we should buy 'em a beer."

Brett Barton - Honestly, we've had great historical figures have great messages and then some misguided individual(s) will jack up the message and transmogrify it into a monster of it's own that deviated from the message in the first place to create a new agenda

Ricky Mujica - The police are scared to death of "the angry black male". That's why a simple protest in Fergusson is met with the "war powers act" (I'm surprised they didn't bring nuclear weapons), while a real threat like that Bundy idiot is by met without any police action at all.

Brett Barton - I saw an angry black at the movies one time.

Long story short we split the price of the candy....

Khalil MuMinun - That's why we can't afford to concern ourselves with the opinions of those who have bigoted views about our people.

Muhammad Rasheed - That's a good way to get shot by being unconcerned at the irrational fury of the guy who hates your guts and is arming himself to put you in your place once and for all.

Muhammad Rasheed - But whatever. Do you.

Muhammad Rasheed - Don't let racism keep you from pursuing your happiness, but don't be foolish and ignore the very obvious dangers of a group who absolutely don't have a problem slapping you in chains and/or killing you because they feel like it.

Brett Barton - "I know nothing"

Muhammad Rasheed - TALK, BRETT! What do you know???

My point is that we (Black People) should do what we believe is right and necessary to preserve our life and the integrity of our community. I was not suggesting that we turn a blind eye to those who work to perpetuate the subjugation/exploitation of our people.

I blame that damn Brett...

Brett Barton - So we blame the white guy.

Muhammad Rasheed - Shut up, you!!!

Brett Barton - Only for about another 364 years. Then that's it.

Muhammad Rasheed - You know you ARE different from these others. [rubs chin thoughtfully]

Maybe you DO have German ancestry.

Muhammad Rasheed - What kind of name is "Barton?"

Muhammad Rasheed - What about your mom's side?

Brett Barton - Italian and native and some other stuff

Muhammad Rasheed - Oh. Never mind then. You must just be defective or something.

Muhammad Rasheed - Or maybe the black John Connor reprogrammed you when he sent you back?