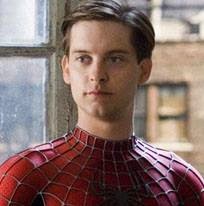 4.) With high hopes from a loyal True Fan base, Spider-man 3 went on to make a billion dollars as well, though the fans were disappointed and confused at the uncharacteristically messy plot and inconsistency with the other films. Criticisms were generally negative and the director himself was blamed for the creative problems, while the exec went on to receiving super bonuses and probably two or three promotions, handsomely rewarded for destroying what was gearing up to be a truly magnificent series of films.
Posted by M. Rasheed at 6:38 AM No comments: