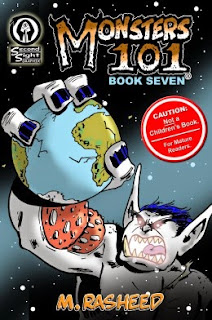 
the three cents:
In this latest volume of Muhammad’s MASSIVE graphic novel series (with each issue clocking in at over 150 pages), we have several plot threads culminating into my personal favorite overall issue to date. And I really dig this series. But bully turned monster turned hero turned king of the monsters Pugroff has been slowly possessed by something from Beyond, something very comparable to a Lovecraftian Elder God. And with this book the possession is in full swing, as the young monster is now under the full control of Irylor, a First King and the Cosmic Guardian of the Fourteenth Nexus, who wants to take over the Seventeenth Nexus…Earth. As Irylor (via Pugroff) proceeds to destroy the city, battling the police, the army, and an assortment of superheroes and villains, Mort finally meets one of the Golden Order of the Encircled Serpent, with the two teaming with Earth’s mightiest hero the Seventh Unicorn, to battle the other dimensional nightmare in his own realm. As much action as there is in these pages, the amount of plot developments twisting and turning is astounding. The exposition dialogue between Mort and the lady wizard especially is an essay on metaphysical evolution unto itself. There are a number of new characters introduced, along with familiar faces returning, and still we are given flashbacks to legends of old that only flesh out the world of Monsters 101 with startling insinuations. This is just irresistibly phenomenal storytelling, through and through. The art is crisp and clean, and very fun to follow. Even with the warranted appearance from super-powered beings, no stereotypes are paid due, and the pages set in the other realm are as horrific as the story entails. There are even some touches of CGI added into the otherwise black and white artwork, giving even further accentuation to the abnormal elements of the tale. Ending on a couple of powerful twists, Book Seven is a jam-packed page turner. Special attention given to the role of spirituality in the world of Monsters 101 is an added bonus, and as well a further reminder that this is really one smart read. Mort’s quest for magical power is as compellingly original and well-conceived as is the strange life being lived by Pugroff. How this series will end, at this point, is very hard to discern, and I like that. I like to be caught up in something so wonderfully unpredictable, branching off into so many fictional territories so competently well. This is such a unique and imaginative series…I honestly wish more folks would take the chance and get sucked in as profoundly as have I and my picky tastes. It has been a truly great journey thus far, and one I do not care to see end.