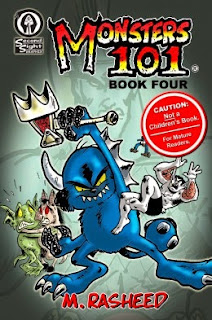 
the three cents:
After playing out assorted dramas on the devil world, our heroes Pugroff and Mort return home, finally. Though only having been gone for a few weeks, they find that time flows differently in different realms, so that a full year has passed on Earth. And boy, was Mort's Grandma worried! But the adventure keeps rolling and the plots keep thickening, as the monster trio Maescus, Lodeth, and Porgram are themselves on a vengeance quest for Maescus to empower the fabled Dragon's Fang, ax of the faerie, in order to take over Nashera realm of monsters with an iron claw. Along the way we learn of Dragon's Fang's original owner, the legendary Shargayt the Seawolf, hero of olde. Lots of great story developments here, and honestly...just when I think Rasheed has gone off too far on a side track he expertly brings back past threads, keeping everything wonderfully congruent yet expansive. Absolutely thoughtful world building. Benkom the lone magick-using monster is still around, and I foresee him being cast as neither good or bad per se, just a selfish creep with several tricks up his sleeves. Azoratain the dragon is up to twisting events to his betterment, which suggests the heroes will soon face a darker level of evil than anything they've yet encountered. Ulam, the king of Nashera is another new character introduced and has a fantastically gruesome design. And we have the introduction of Heddark, a monster with similar structuring as Pugroff who elects to betray his people for a newfound pseudo paternal role. So many cool and imaginative characters, fighting through a story that has the friendship of Pugroff and Mort still stumbling as they try to find their direction in the new doorways of magic and adventure and scary things being opened up to them left and right. Story highpoint (for me) was Pugroff being in the monster realm all of ten minutes before initiating a barroom brawl. The art is even smoother and more refined, more sure of itself. Rasheed here also begins utilizing a more dynamic inking style, with bold borders more easily representing the differences in size scale of the many crazy creatures in Monsters 101. He is still using 70s Marvel for inspiration for the many fight sequences, in an incredibly fun way. Very inventive settings and monsters, as always. This still is not a book for younger readers, as for example there are an awful lot of corpses of small children in this issue (the snack of choice for monsters as they peek in our windows late in the evenings to watch television over our shoulders...). The main characters are merely preteens, of course, young and inexperienced in the ways of the real world, let alone the fantastical stuff Rasheed insists on putting them through. As such, they realistically act and react as boys should or would- something that shows extra obvious care on the part of the storyteller. I love small press, especially the small press that really freaking deserves larger markets. Monsters 101 is a complete package. Stunningly original.