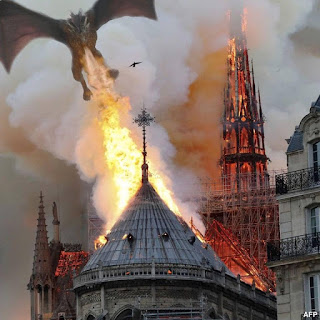 Tom Garden - @Julius... you need to learn some respect. It was a thousand-year-old icon. You need to learn to View events outside of the American racist view that we all have.

Julius Carry - Tom... you need to acknowledge and call out the institutionalized racism in this country before lecturing me about some shit that has no bearing on my life or the life of others that look like me.

Muhammad Rasheed - @Tom... A thousand yr old 'icon' that was 100% part of the trend of savage, white supremacist, European conquering and pillaging all over Africa.

Julius Carry - I guess I should feel bad when old Plantations burn down, because history?

Tom Garden - When all of Europe is burned to the ground and every mansion south of the Mason-Dixon line has- been destroyed will you find Comfort here?

Muhammad Rasheed - @Tom... Will I find comfort in seeing the total destruction of the White Supremacist Ideology's global blight and the anti-Black systemic racism for which it stands?

Julius Carry - I was just trying to make a funny y’all.

Muhammad Rasheed - It was funny to me.

Julius Carry - I can’t take the credit for the photoshop though! Lol

Tom Garden - @Muhammad... seems a bit racist to me don't you think?

Muhammad Rasheed - @Tom... Pushing back against 400 yrs of anti-Black racism isn't racism. It's righteous rebellion against a demonic oppressor.

According to the reports, the white supremacist idol-worshiping edifice (French edition) wasn't structurally damaged anyway. They'll throw some of their unlimited, plundered-from-Black-flesh wealth at it and make it better than ever. So relax.

It's a special thing to have such a strong sense of national identity based on lineage and shared heritage. Obviously such a mindset can't WAIT to step up in pride to help out one's Nation.  #ADOS #AmericanDOS