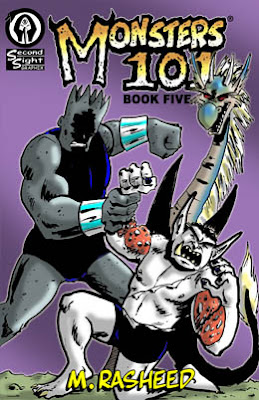 Wall to Wall Super Action! - A surprising reveal for Pugroff in this segment when he and Tanglewood Middle School’s Principal Smith discover each others’ secret identities. It turns out that Smith is retired former crime fighter Eye of Justice, who gives the monster some sound advice on some issues that have been plaguing him. Meanwhile Azoratain the trickster dragon is both surprised and delighted that the three monsters’ quest for the legendary faerie battle axe Dragon’s Fang was successful, and he comes to steal it for himself! Proving to be easier said than done when such a weapon is wielded by the ferocious Pugroff, the wily worm enlists the aid of the former bully’s oldest foe, Cliff the Hall Monitor, who is resurrected from the grave and given enough power to enable their momentous battle to continue where it left off… with Cliff beating the heck out of Pugroff!