Has the Pac-Man Lost His Bite? 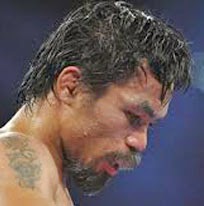 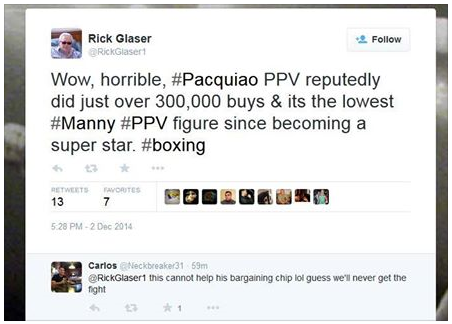 Roy TgaHawk - hmmm...why do you always compare Pacquiao with your boy Canelo?

Albert Mvl Rodriguez - Because him being a up and coming ppv star you would expect the top P4P guys would have top ppvs.
I just got a lot of respect for the young 23yr old.

James Hutton - Even if there is a PPV star competing, it does matter which opponent he chooses.

Kevin M. Cook - That fight was horrible. 300k buys is a miracle

Tom Lux - 100K of those buys are from people that only knew he was fighting by dropping Floyd Mayweather's name and dropping his banker "Floyd fight is next"
Arum, Pac and Roach peddled this tactic hard a month before the fight Embarrassing.
40 million doesn't seem too bad now let alone 40mi + 30%PPV eh manny?!?!?!

Ya-Sin Abdul-Matin - Dynamite numbers considering it's free a week later and Chris was nothing to really write home about going against him amongst real fans.

Joseph Lopez - Canelo didn't fight Algieri, and the fact that he has been fighting in Macau as opposed to the U.S. I think that's starting to hurt his PPV numbers. Most people had never heard of Algieri, Lara wasn't exactly a household name compared to Algieri, but many hardcore boxing fans knew that Lara was a hell of a fighter, and that Canelo-Lara was realistically a "50-50" fight.

Muhammad Rasheed - Mayweather felt that way about it from the beginning.

Tom Lux - 2009 I would of agreed with 50/50 tbh and I hate manny and I admire floyd. Each year that goes by that shit flips over to floyd by 10% cus manny getting put to sleep etc lol

Tom Lux - That's all he is? A women beater? Wrong.

Muhammad Rasheed - @Adrian - I think it's pretty obvious he's admired for his boxing skill -- the very reason he's on the world stage -- and not for his personal life.
The same reason people praise Woody Allen; no one is admiring his pedo appetite.

Royce Tee Taylor - Y'all are trippin. Name another ppv that did not happen in America where it was a foreign star vs an absolute nobody and the ppv buys exceeded 300k?if it were PAC vs canelo in Vegas and they did 300k, I would say his star is dead. But he's getting 300k american buys while fighting in China vs a guy with only one credible win over another not so well known guy. Puuuulllleasssse. Y'all know no chill.

Roy TgaHawk - The most logical comment on this thread I think. You know your boxing.

Adrian James Davis - Without manny .. avoid mayweather will never have the biggest fight of the decade/century, no one only pacman can give him that..it should be a 50/50 ..either guy will sell out wembley london 80,000 seats with an A mere con fight ,,

Christopher Rada - People tripping over the fact that he couldn't hit 1m views with a fight that even wasn't in America with an unknown opponent who was at the front of the promotion the whole time. It should've been expected for that ppv to tank with the amount of shit pacquiao's team got for picking a C class opponent like Algeri

Muhammad Rasheed - If both Pacquiao and Mayweather were "managed talent" under the old system, where the suits behind the scenes get the lion's share of the profits generated, I would be willing to agree to a 50/50 split.

Roy TgaHawk - False. You really believe he's his own boss? I beg to differ. Haymon just tells him that...& Floyd believes it!

Believe what you wish.

Roy TgaHawk - Muhammad Rasheed is right. Believe what you wish. Floyd believes what Al tells him....now you belive what Floyd tells you. :D

Adrian James Davis - Mayweather can hardly read..hes a boxer not a businessman and will do anything not to lose the 0,, i

Muhammad Rasheed - "Mayweather fully reaps the benefits of being boxing’s biggest attraction through a business model where he controls all of the revenue streams of his fights as promoter via Mayweather Promotions (Golden Boy Promotions handles most of the logistics of Mayweather’s bouts as co-promoter)." Kurt Badenhausen, Forbes Magazine

Floyd Mayweather: By The Numbers

Muhammad Rasheed - "Manny Pacquiao may be more popular, but no boxer makes more on fight night than the self promoted and self promoting Floyd Mayweather, who controls 100 per cent of the purse and pays out the guy he was just punching when it's over."

Muhammad Rasheed - There's no way Pacquiao should get 50% when he's basically just a contractor that Floyd is hiring for Floyd's event.

Muhammad Rasheed - The old model doesn't apply in this case; you shouldn't keep saying "50/50" as if it does.

Roy TgaHawk - Why do you wanna keep bringing up that 50-50 split excuse/demand by Floyd? There's no argument there. Didn't Pac agree to get the lesser purse in order to ensure a fight?

Muhammad Rasheed - I only mentioned it in response to a comment above, Roy. Calm down.

Roy TgaHawk - ...but this thread was abt Lara & Pac's PPV. Somebody just had to mention Floyd in this thread where Floyd has nothing to do with in the 1st place.

Muhammad Rasheed - Again, I was just responding to something someone else said. Relax. What are you? A cop? jesus...

Muhammad Rasheed - You. You're freaking out.

Muhammad Rasheed - Take a pill and lie down.

Roy TgaHawk - Ok. The person that need to relax, I think, is the guy who had to google all that stuf abt Floyd...but I could be wrong.