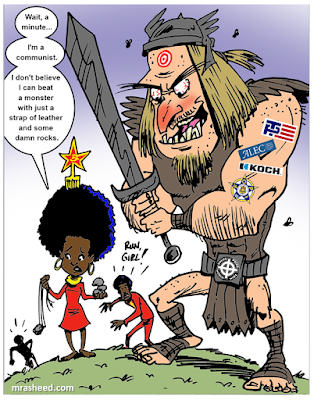 CITATION
Rasheed, Muhammad. "Communism versus the Black American." Cartoon. The Official Website of Cartoonist M. Rasheed 02 Jul 2017. Pen & ink w/Adobe Photoshop color.
CLICK & SUBSCRIBE below for the Artist's Description of this #MRasheedCartoons image:
M. Rasheed on YouTube!
M. Rasheed on BitChute!
**************************
Muhammad Rasheed - How do we turn African-Americans away from communism? It would definitely be hard, requiring at least double the amount of indoctrination designed to deprogram them from it than was used to program them with it in the first place. It would be a lot harder to remove it nowadays though, and it will get worse the longer it takes to implement the plan.

Repent and get right with the One God who made you, repair your broken homes, regain your wealth, and come together to defeat this monster once and for all that you may be finally FREE.
See Also:
A Dream One-Hundred Years in the Making
NO!! Douse the Bern!
McCarthy's War
________________________________
SUBSCRIBE and receive a FREE! Weapon of the People eBook by M. Rasheed!