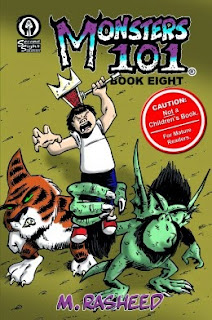 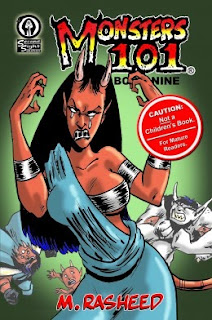 
the three cents.
After the Earth-shaking drama of the last installment of Rasheed’s graphic novel series, he took a slight rebreather to pursue some side projects for others (notably contributing quite a bit to the Naive Project’s 100+ page, non-profit book to raise funds for the Brain Aneurism Foundation), but now the writer/artist par excellence is unleashing back-to-back chapters of the soon to wrap title. Every issue has been approximately 150 pages of all-new and highly original content, entirely written and illustrated and lettered and packaged and published by Rasheed all by his lonesome. When Book Ten hits later in the year, the genuinely epic Monsters 101 saga will be finished, clocking in at a 1500 page masterpiece in modern fantasy. What this Joe Kubert School alum has accomplished/is accomplishing is profound in every sense of the term.


Book Eight has the now-human again Pugroff, with the legendary Dragon’s Fang still in hand, trying to preserve his place atop the Nasheran throne, ruling over the dimension of monsters. While he has evolved tremendously from the schoolyard bully of the start of the series, he is still very much the lovable miscreant brute. Elsewise, Mort continues his quest for someone (or something) to play mentor in his magical studies, which involves trips to several very weird places across the fabric of existence. The events of Book Seven may well have been the “slug-festing across dimensions, war of the worlds and the kitchen sink” chapter, but the scale and scope of this series continues its forward march of ever-expansive storytelling. In Monsters 101 Rasheed not only creates a new fictional universe, but the fullest conceivable cosmology to go with it, showing precisely how Christian mythology and ancient Egyptian symbology and European folklore and Terence McKenna’s “neon trolls” and an almost Lovecraftian spin on space and time all actually fit together marvelously well, with even insinuations as to how current socio-economics is affected by such reality tunnels in general. And he does this through the eyes of a couple of preteen boys, coyly examining some truly lofty subject matters comparably like a spoonful of sugar to help the medicine go down. Much of the black and white artwork can be rather cute, yet he captures the absolutely alien “other-ness” of what lies beyond in mood so casually as to be frightening unto itself. The final twenty pages or so of this volume in particular contain a literary jaw-dropper on par with the most intelligently researched of comics from the early years of the Vertigo imprint at DC back when.


Book Nine has a return to Tcharen Koh, the dimension of devils, as Mort’s earlier rejection of the resident princess has apparently resulted in a family feud destroying a ten-million year old city. Later, Mort is recruited by a hermetic order called the African Architects, who inadvertently provide commentary on the entirely false and laughable theology of the Crowley/LaVey crowd. There is also a greatly fun sequence here involving elementals where Rasheed gets to flex his artistic muscles, and like the rest of the book one can flip through and presume by the brushy, animated art style that the content is for younger readers. It really is not, at least none below the more precociously bright mid-teen comic book enthusiasts. But as appealing as the art is, I really think maybe too much of the story may completely go over the heads of even adult audiences, as a lot of the story is very suggestive of intrinsic theological study. His forms have become increasingly more defined though, with his already keen visual storytelling sense showing even more detail in its imagination. Mort is such a neat character especially, believably wise beyond his years and having some very thought-provoking lines of dialogue, but his being one of the few actual humans in the story really serves as a visual anchor for the more fantastic bits, like a measuring post to give perspective to the strangeness and surreality of the narrative, fun as they all nonetheless are. Someone such as Neil Gaiman may readily romanticize a Western take on older mythology, but Rasheed scientifically finds the bridging points between mythology and theology, while being every bit as entertaining in the presentation. But the plotting is so much fun, with clandestine magic-users and superheroes and angels and demons and faerie and…omni-dimensional entities all crossing adventuresome paths. This is really rich fare, so astonishingly full of depth and intrigue, but still surprisingly light-hearted and entirely readable. These installments, and the series they belong too, are high on the list of the most original comics material I have EVER encountered. Rasheed is just such a phenomenally gifted and talented artist and teller of incredibly interesting tales.


For additional details, check out his website linked above, as well as his personal blog. Right now, he has been nominated in three separate categories in the Glyph Comics Awards (story of the year, best writer, and best character). As a longtime fan and friend of the hard-working Rasheed, I am personally thrilled for his success. His skill and passion are thoroughly inspiring.