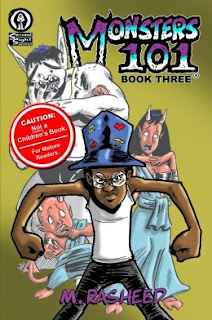 
the three cents:
The third chapter in the Monsters 101 series of graphic novels continues the otherworld adventures of Pugroff and Mort, with Mort taking the lead role as his thirst for magical powers lands the two deep in the heart of devil country. While Mort's one-track obsession may be endangering their well-being, the boy magician and the boy monster together prove themselves ready for just about anything. Pulled into the inner circle of the devil royalty through valorous deeds, Mort and Pugroff meet new friends and enemies as the ongoing exhibition of monsters (and what the term may ultimately imply...) continues through incredible pages of imagination and clarity of vision. Rasheed is really impressing the heck out of me with his series. Along with keeping his main characters, regardless of physically and emotionally monstrous changes, portrayed as preteen children still, his storytelling can encompass everything from quite humorous bantering back and forth between Mort and Pugroff on up to establishing a massive new cosmology that mixes the Greek poet Hesiod with Milton and Gaiman. Granted, each issue of this is roughly 150 pages or so, but he has already built foundations for a universe here, along with enjoyably realistic heroes and villains. While Pugroff is still an oversized bully turned nightmarish brute, Mort as well is showing himself to be something not quite normal or necessarily hero or villain. A curious pair. If anything, one can surmise by this point in the narrative that indeed all heroes and villains are still monsters to somebody or other. Like Oscar Wilde once said, "Every saint has a past and every sinner has a future." The good guys and the bad guys are all subjective terms, as anybody can turn on a dime, and any hero can have a hero of their own to look up to and any villain can have a villain of their own to be scared to daisies of. I was actually wondering if certain suggestions in the story were going to be left unacknowledged, until the awesome (and tragic) Pherlyren stepped in and laid down the law while pointing the direction the overall story will take. Real neat developments, with the coming quest for Shemesu Heru, the Followers of Second Sight. The art is very nice and portrays some genuinely psychedelic subject matters later on as Mort experiences the altered states and altered dimensions of the path for magical awareness. Very mature stuff, and very engaging representations of things straight out of dream. Lots of forethought is clearly going in to the design and moods of his characters, his settings and his panel-flow. I grew up reading a lot of comics with Milgrom and Sinnott in the credits boxes, and I think Rasheed may have too- in a very, very good way! This is an excellent segment from an excellent line of books. The line about the Black Panthers particularly cracked me up. This story of young monsters infers things that you just don't read of everyday, and for that Rasheed is doing a royally bang up job.