"The Sensation You're Experiencing is called 'The Quickening'" 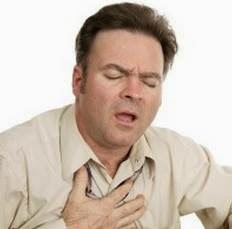 Gary McCoy – [shared photo] CNN shows how many total viewers they have... 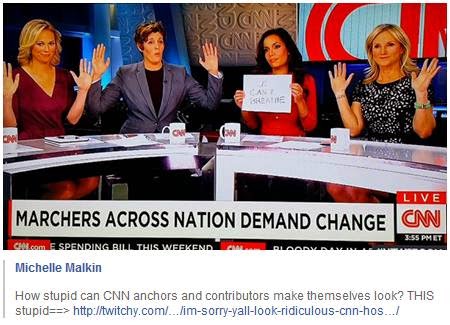 John Richards - As long as they all have their hands up... "Give me all your money!!"... There, now the memory of the 'Gentle Giant' is complete.

Gary C Li - If serial killers and despots were always portrayed by their childhood photos, we'd be "sympathetic" to them too. Does not make their crimes any less gruesome though.

Martin Roules - I thought they were surrendering to FOX NEWS as the all time ratings winner ... :D 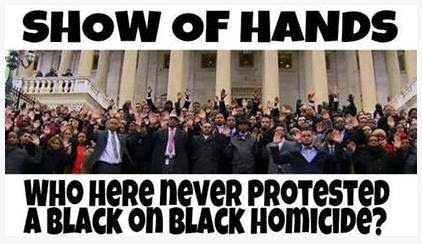 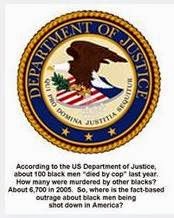 Muhammad Rasheed - It seems like you all are suggesting that because black criminals kill other blacks inside of black communities, that it's perfectly okay for whites to kill blacks, too.

Muhammad Rasheed - So is it okay for blacks to kill whites since white-on-white crime is equally high?

Ian Macfarlane - Your logic is astounding...... albeit based upon false presumptions, and then based upon the Media fueled 'false' narrative!

Ask Martin up there... while he's cherry-picking facts from the DOD site… what the white-on-white crime statistics look like, while you’re busy having issues with your integrity.

Ian Macfarlane - The 'Hands up, Don't Shoot' narrative was a lie. This is what we re talking about.

How many posts above you mention "black-on-black crime," Ian?

Ian Macfarlane - I am only speaking to the original 'Twitchy' post by Gary. I am not here to defend the comments of others. Yet you drew 'Strawman' conclusions which were set up and designed to instigate some sort of stupid argument, which is initially based upon a falsehood .. namely .... 'that it's OK for Whites to kill Blacks'! Clearly! .. your comments were meant to stir up trouble. You keep using the term, 'Integrity Issues'! I'm not sure you know exactly what that means? Are you inferring that I lack 'integrity'? ... and therefore anything I say is somehow skewed? We are only discussing the Ferguson case - nothing else - and for you to make it into something else, is dishonest. 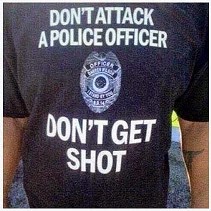 The Blacksphere – That's a novel idea - think it will catch on?

Muhammad Rasheed - If the point of continuously bringing up "black-on-black crime" whenever blacks complain about unarmed black youth getting killed by white cops ISN'T supposed to be implying that “it's okay for them to do since you are doing it,” then what IS the point, Ian? #integrityCheck

Ian Macfarlane - You are obviously drawing the wrong conclusions. Inform yourself about the Brown incident.

Ian Macfarlane - No! ... I won't! .... Because you clearly own your own agenda, and the FACTS on are record ... if you care to read them. I won't get sucked into a debate with you, because, quite frankly .. it would be a waste of my time. 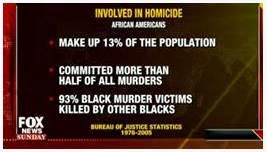 Ian Macfarlane - @Muhammad Rasheed... I've been reading many of your posts! It is CLEAR that you truly believe Michael Brown was just an innocent kid who was murdered, in cold blood, by a bloodthirsty white racist cop, for no reason at all! This is your belief! I get it! .... You have just confirmed for me, why the riots continue on .... by people like you.

This means that the facts are NOT on record, and you are a racist. Thank you. Naturally if they WERE on record you would have zero problems putting them in my face. I called your bluff, and you were forced to backpedal. Good job. 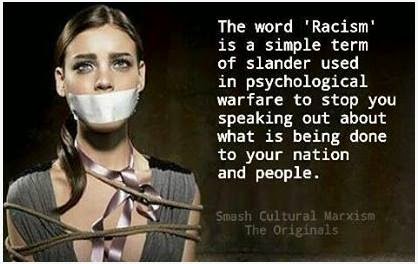 Muhammad Rasheed - Ian Macfarlane wrote: "I've been reading many of your posts! It is CLEAR that you truly believe Michael Brown was just an innocent kid who was murdered, in cold blood, by a bloodthirsty white racist cop, for no reason at all!"

Oh, there was a reason. Darren Wilson hates black people, just like the posters in this thread.

Brown WAS an innocent black kid who was murdered by a racist white cop, whose racist companions conspired to keep Wilson out of prison. This is how the racist privileged class traditionally operates in my country.

Ian Macfarlane - OMG! ... Whatever Rasheed! So anyone who disagrees with you is a 'racist'?

Muhammad Rasheed - No. Just the people that hate black people, like you and the other whites in this thread.

Ian Macfarlane - Muhammad Rasheed ... Take a Bow! Tell us what you really think?

Muhammad Rasheed - The whites in this thread are racist as shit and have zero integrity.

Muhammad Rasheed - I thought it was obvious what I thought... or nah?

Ian Macfarlane - I'm sorry you feel that way. I am not racist. But criminal acts sometimes lead to unfortunate ends.... especially when someone attacks a policeman/woman. 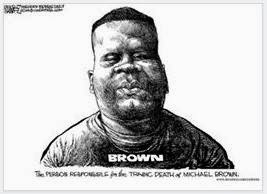 Gary McCoy - Muhammad, "...Just the people that hate black people, like you and the other whites in this thread."? Are you smoking crack? (Before you call Rev. Al, I say that to white people too.).

Sandy Brown Zumbro - In race-baiting world, I guess this lady is racist, too. smh

Ian Macfarlane - That is why the CNN photo becomes so disingenuous, and CNN makes themselves irrelevant as a news source.

Stilton Jarlsberg - Was this Al Jolson Day on CNN?

Sandy Brown Zumbro - ALL lives matter. To be taken seriously when they say that black lives matter, they should show concern about all black lives, not just those lost as a result of committing a criminal act. 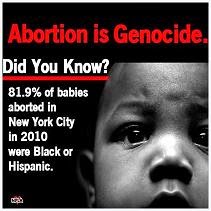 I'm sorry I have to feel that way.

Ian Macfarlane wrote: "I am not racist."

Then why are you saying these things but you can't see the same stuff in your own people?

There were no criminal acts. Brown WAS an innocent kid with no criminal record, and the KKK-affiliated Wilson just felt like killing him. He built his defense on 1/2 his integrity as a cop, and 1/2 on the "scary black guy" stereotype. And you and the grand jury bought it.

Muhammad Rasheed - Gary McCoy wrote: "Muhammad, "...Just the people that hate black people, like you and the other whites in this thread."? Are you smoking crack?"

Rev. Al is not my leader.

Muhammad Rasheed - Sandy Brown Zumbro wrote: "In race-baiting world, I guess this lady is racist, too."

This entire thread is a racist baiting tool. Did you think that only other white supremacists could see it?

Muhammad Rasheed - Sandy Brown Zumbro wrote: "ALL lives matter. To be taken seriously when they say that black lives matter, they should show concern about all black lives, not just those lost as a result of committing a criminal act."

This is the straw man argument that Ian mentioned earlier. Who said that there were no anti-crime efforts going on in the black community? Why are you just assuming that nobody cares about the crime in the poor neighborhood communities when we also get furious at outsiders coming into our communities and killing us based on their pre-programmed prejudices?

What is the point of misdirecting towards a different issue whenever I protest your people killing my people, if it isn't to argument that you think it should be allowed?

White criminals kill white people in your own communities, too. If every time a black criminal killed a white person, and you protested, and I immediately pointed out that white-on-white crime goes on as my direct response to your protest, how would that seem to you?

Muhammad Rasheed - What is wrong with you all?

Based on what? The word of a KKK-affiliated cop? Do you hear yourself?

Muhammad Rasheed - Martin, my outrage at the increased poverty, widening gap between the lower and middle class, and predatory corporate interests that take advantage of that situation -- although related -- is not the topic of discussion in this particular thread. I absolutely do have those discussions, with equal passion, but my current irritation comes from you all using those topics as a clear misdirection from this particular one.

Tell me: How come every time I protest the violent death of one of my own by one of yours, you immediately bring up black-on-black crime statistics? Tell me honestly how you would feel if I continuously brought up white-on-white crime statistics to justify why it is okay for black criminals to kill whites? 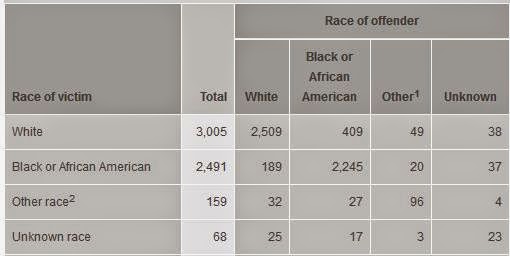 Muhammad Rasheed - The criminal element is just as ferocious among your people as they are among mine. Instead of bitchin' about what the First Lady is wearing or whatever other typical nonsense you all go on and on about, how come your Timelines aren't full of your outrage over how your people are treating other whites?

Muhammad Rasheed - Your nigh-continuous hypocrisy over the race issue keeps me furious with you.

Muhammad Rasheed - I know you all don't care to talk about race with us. You like to pretend you are the good guys all the time, and being forced to confront those items that represent the Euro-ethnic's legendary great wrongs cause you cognitive dissonance something fierce. I recognize this in you. But hiding from it only inbreeds this self-reinforcing fantasy land that you never do any wrong to anyone, you deflect all accusations away from you with slimy agility, and you convince yourselves that I'm the world's biggest threat, even though you've committed the greatest atrocities, and amassed the highest body counts since you've taken power in the world.

I think you are broken.

Muhammad Rasheed - I think you like being broken, are fiercely protective of this fantasy you've built up, pretending you are the good guys in the story, and you attack me because you are afraid that I'm going to topple you from power at some point, and you are trying to delay that karma for as long as you possibly can. That's what I think.

I want to talk to you about it, probe and analyze it. But I know you run from such subjects like they are the devil himself because it threatens your precious Caucasian Male Dominance Psychosis Forcefield. 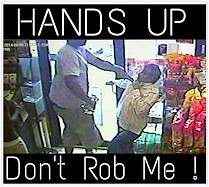 Sandy Brown Zumbro - Stop pretending that it's not him.

Muhammad Rasheed - It's CLEARLY not him by way of the store owner never saying it was him. The cops alone said it was him because they needed it to be for their lie to work. 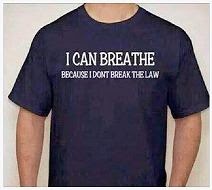 Muhammad Rasheed - I'll admit to being genuinely fascinated by a fantasy world in which t-shirt messages and Facebook memes are admissible as proof of anything.

Muhammad Rasheed - You must be the Klan's marketing director.