Disneyland Dads: Messin' It Up for Everyone 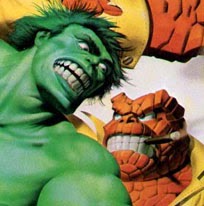 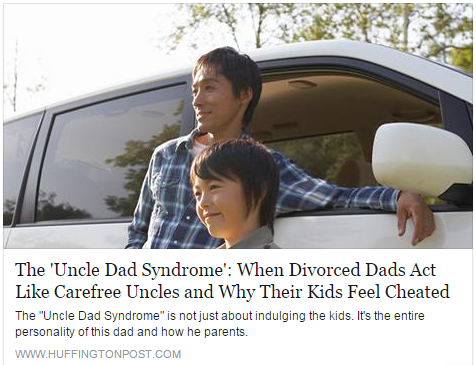 Muhammad Rasheed - "Uncle Dad" is less likely to have a team of high-priced intellectual property lawyers knocking at your door if you use it in a book or article.

Michael Daniels - That's kinda ironic as I heard the term from a family law attorney. I think it would be fair use. It's not meant derogatorily against Disney in any way.

Muhammad Rasheed - Hearing it used casually by an attorney in conversation is different from the attorney publishing the term in a book though. The term is definitely derogatory itself, and the Disney corp probably wouldn't want to be associated with a "crappy dad syndrome."

Michael Daniels - lol...Mo, I just actually read the article (did you), the author, who is also a family lawyer, uses the expanded term twice incuding once in the first line, with no apparent fear of legal repercussion.

Karla Holland - The worst uncle dads are the ones who think such behavior deserves them respect ("I send you lots of toys and take you places and this is how you treat me?"). These same idiots have nothing yo say when called out on their failure to teach life lessons and true discipline.

Muhammad Rasheed - Michael Daniels wrote: "lol...Mo, I just actually read the article (did you), the author, who is also a family lawyer, uses the expanded term twice incuding once in the first line, with no apparent fear of legal repercussion. "

She also carefully put it in quotes, said that 'other people' called them that, and with '--land' added to it actually gives it a different connotation (to me) than what you first said above. She, very lawyer-like, made sure she covered her butt when she did write it, and made sure to distance herself from the term as she took advantage of her audience's familiarity with it. She had no apparent fear of legal repercussion because she knew what she was doing.

She wasn't casually referring to it as 'Disney Dad' like nothing could ever happen to her the way you just implied.

Michael Daniels - Why do I let myself get caught up in this nonsense with you? I made a simple statement. You applied a straw man to that statement (it is highly doubtful you or I will ever write a book on the subject). I get drawn in pointing out that the article you posted challenges your view and then you cite both your mindreading of the author and your imaginary legal expertise as proofs of your outlandish point of view. Why oh why!

Jerry Lee Brice - That was a one sided judgemental article about something somebody is looking at from the outside -in.Does not take into consideration the F-cked up custody orders that force a dad into being a "weekend dad" with the mom being in the primary custody role to talk sh-t about the father 24/7 to the kids,..when we may want to have the same opportunity.
You ever think about how it is to just be able to see your kids on the weekends?..that's a recipe for this type of thing..i could go in to it further, talk about my own experiences..but you may get my point of view,.
I say, EVERY custody arrangement should start by splitting time, and all financial responsibilities for the child exactly 50/50, and give no one parent any advantage in time or money for the child over the other parent, and you will eliminate this dynamic from the family.
MOST women abhor the very concept of a 50/50 split in time and money for the child, because they love to hold over the fathers heads the threat of taking the kids away from them, at their whims, or when THEY decide you are not living up to THEIR expectations of how you need to parent as a father...which gives them power over you.
I say father's it's worth it to fight this women and do not allow the threat of theses child extortion custody and support rulings from family court, or any BS judgemental article like this until you when, or until the child turns 18, and you will not have to concern yourself with his mother's harrassment or judgement of how a father decides to parent his child..
OR-split it all 50/50 down the line, and do some actual co-parenting, and see how they like it.
..and just focus on what is in the best interest of the child.We all have different personalities and we all make diverse parenting choices.

Cyco Myco Nelson - I'm a head case... Or maybe I'm overtly self involved..... Only seeing my children every other weekend was horrible... I didn't realize how much better things were being there all the time... Despite my issues with others... It's hard to express what kind of hell that is... Because it's so easy to see and say...... I'll never make up what I took from them... And I could never give them what they needed.... Trying to make things fun.. Nonchalant ... kids think about everything they see.... and then again.... Not everyone was meant to be a parent... ... some just don't know how to do it.. Fear that they are boring in those few moments they get.. And possibly lose the interest of the ones they love more than themselves

Muhammad Rasheed - Michael Daniels wrote: “Why do I let myself get caught up in this nonsense with you?”

Because I’m an old Internet debate rival, and you just can’t resist the skirmish with me. Like the Thing vs the Hulk.

Michael Daniels wrote: “I made a simple statement.”

I remember. You often do that.

Michael Daniels wrote: “You applied a straw man to that statement (it is highly doubtful you or I will ever write a book on the subject).”

I didn't apply a strawman. You said that you heard the concept of the article described as something else, and I expressed the opinion that the term the author preferred was better, and I provided an example as to why that might be (notice the use of the word “if”).

Michael Daniels wrote: “I get drawn in pointing out that the article you posted challenges your view…”

lol No, at that point you became obsessed with proving me wrong, and in that obsession, failed to notice all the things I pointed out in that post above and now you are butthurt, because you can’t see a way to recover. (that's a 'checkmate' btw)

Michael Daniels wrote: “…and then you cite both your mindreading of the author and your imaginary legal expertise as proofs of your outlandish point of view. Why oh why!”

I don’t even know what you are talking about here. Did she not put quotes around “Disneyland Dads” as well as start the article off by saying that it was what OTHER people referred to it as, and not her? Why would I need to read her mind to see that she was distancing herself from the term instead of just using basic levels of literacy? You’re just mad because you lose when you thought you would win purely by virtue of the term “lawyer” being present.

Deacon: “Legal stuff, huh? This is MY area! Mo better back off! Surely I’ll win THIS skirmish! Let me knuckle down, flex and put him in his place.”

MRasheed: "Beat it, Rockman, or Hulk will smash you again."

Muhammad Rasheed - Jerry Lee Brice wrote: "We all have different personalities and we all make diverse parenting choices."

Your passion for this issue, as well as your love & devotion for your son are clear, Jerry, and have been a noticeable part of your personality on your Timeline for these last couple of years. I can see why an article like this would irritate you, but this quote you ended your post with is the key here. The type of guy she's describing in the article is indeed real, and I've met him numerous times; I posted this because the Uncle Dad's of various levels of competency stood out to me... by name... as she was talking about them. He's the guy that these lop-sided laws were built around, that guys like you suffer for.

I'm curious as to the percentage of Uncle Dads compared to your kind of devoted dads out there, and wonder if the 50/50 split you propose would do more damage in the long term? This very well may be if the Uncle Dad vastly outnumbers your kind of devoted dad. It's clear that the system needs to be tweaked by social scientists who have a better, and more well-rounded insight into the matter, instead of treating everybody the same, which is your main contention.

Jerry Lee Brice - You know I probably could step back from this and see your points here, and you know you are more than likely on point, and right.
As disappointed as i was with the situation in family court, I totally understood why it went down that way, because I am a realest, and i can see what goes on out here in society.

Muhammad Rasheed - I understand, and I 100% see why you feel the way you do about the article, as well as the system itself.

Jerry Lee Brice - ...it was the whole "Disney" thing that hooked me!lLOl..

Muhammad Rasheed - The article's author isn't your enemy. It's the guy that has these kids and doesn't give a shit that these laws are created around that is your enemy. He's the one that makes all divorcee fathers look bad.

Jerry Lee Brice - You are right man, I was just over personalizing the article.I can see the bigger picture.

Muhammad Rasheed - Well, it IS a very personal issue for people in that situation, and you certainly sound as if you are shell-shocked from the war.

Jerry Lee Brice - LOl!..post traumatic stress man!LOL..I just always try to remember it's not about me, it's about whats best for the child, and try to manage my my reactions to whatever..but you know , I have developed some "feelings" about the issue...and my opinions on it are probably not very objective.

Muhammad Rasheed - And understandably so.

Jerry Lee Brice - ..but whatever the case may be, children are a blessing, the more the better!LOL..I look forward to having some more.
Posted by M. Rasheed at 9:01 PM