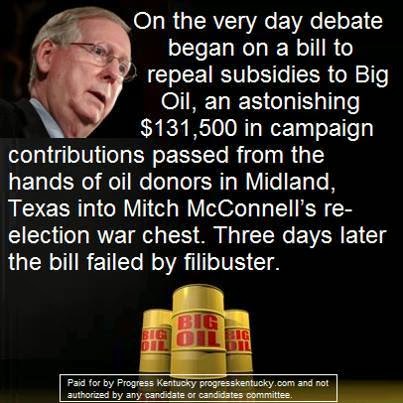 Muhammad Rasheed - [shared meme] So Big Oil not only sky rocketed their prices from under $1 a gallon to $5 a gallon raking in crazily obscene profits, but they also rake in billions in welfare checks from the US gov as well?

But whenever their pundit, talking-head puppets start flapping their blood-sucking mouths, every problem in society is always the poor's fault?

Zodicus Zu'ul - why is it even legal for a Texas based company to give money to a Kentucky senator? oh... wait... nevermind.

Muhammad Rasheed - I'm genuinely interested in how the far right justifies it being okay for the wealthiest people and corporations in the country to regularly receive the FAR larger part of the government's Free Money Welfare Pie that they only pocket for their lives of decadent excess, but blame the poor for all of the country's ills for buying a bag of chips with their food stamp card. Please explain that situation using reason and logic where that it will actually make sense so people won't consider those who vote Republican as the actual problem. Please. I'm listening. If there is a rational explanation then I am honestly all ears.

Abdur Rasheed - That's an easy one. Corporations are people and these people are "JOB CREATORS" whose prosperity trickles down to everyone. If they don't get those billions in subsidies they would have to pay their share holders LESS and therefore would never invest in new lands to drill in or new technology to add new products to market and create more jobs for the poor.

Corporations and the wealthy are what makes the world go around and ANY talk of reducing what we pay them or even holding them accountable for their own short flaws threatens the very fabric of this NATION.

If you are against paying corporate welfare and FOR them paying their share in taxes or them paying for the worst oil spill in human history then you are a socialist and are Anti-American freedom, and you probably hate Jesus and Christmas.

Is U.S. Now On Slippery Slope To Tyranny?

Muhammad Rasheed - I'm not seeing how the referenced article relates to your selected block of far right talking points.

Also, please explain the talking points in a way that make sense to someone not a Republican.

Abdur Rasheed - I did. Read it again.

Who are you, Kirby?

Muhammad Rasheed - Abdur Rasheed wrote: "It seems that everybody wants a President until they get one. Then they want a dictator. Smh"

That was Sowell's point in the article. He took issue with the White House confiscating BP funds without going through the proper channels, and how no where is that within the presidential powers. He didn't say anything about them not being held accountable, just the overstepping his powers thing. It wasn't relevant.

Gerald Welch - This is an easy fix. Only allow INDIVIDUALS to appeal to their representative. Those individuals have to have their primary address in the district of the representative in question.

Abdur Rasheed - I got nothing.

Muhammad Rasheed - Gerald Welch wrote: "This is an easy fix."

I wasn't looking for a fix, just an attempted justification for the sickening hypocrisy. There are few things that make me angrier than this one... FB posters that blame ALL OF THE COUNTRIES ILLS on the poors' petty thefts, when the greed of one wealthy jackass can outspend all of the poor street criminals combined. Everyone, rich or poor, are going to do wrong. That's what humans do. But in an intensely partisan climate that effects ALL of us whether we even want to be partisan or not, I'd like to hear a better explanation from the extremes as to why they hold onto the side that they do.
Posted by M. Rasheed at 1:57 AM