The Questionable Value of an Enemy's Unsolicited Advice 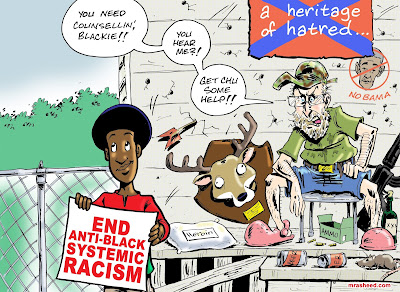 Muhammad Rasheed - Within the context of an anti-racism discussion, the definition of a “good white person” is a descendant of the European ethnic tribes who rejects the concept of “whiteness.”

“Whiteness” is the racist aristocracy that crosses all class lines, and upholds a “superior” socio-politico-economic class group along racial phenotype by the subjugation, exploitation and plunder of the wealth of Black people. A “good white person” would reject this evil system, and not only wouldn’t take it personal to witness the anti-racism activists fighting against anti-Black systemic racism (and its entire tool kit, which includes the marketing-propaganda arm that supports it, as reflected in the official dictionary definition), but would actually aid in the battle against racism and its supporters.

David Dunn - This illustration is stupid...that's not what we are supposed to be doing, Black dude will be dead in 10min

Muhammad Rasheed - We're not supposed to work to end racism?

David Dunn - that scene above...is a dumb way to get killed. Its smarter ways to do that.

Muhammad Rasheed - I get you, but the cartoon isn't designed to reflect any kind of literal reality. It's actually a caricature of some jackass who was talking mess to me the other day in another thread:

David Dunn - Buy firearms, teach your family how to shoot, and protect the kingdom, because marching and signs dont work against racist terrorists. Its very dangerous now.

Muhammad Rasheed - This is my official opinion on that position.

Jason Thomas Lam - Gotta stop seeing people as your enemy just because of the color of their skin. You can't end racism with more racism

Muhammad Rasheed - @Jason... The Snopes article you screenshot is addressing another article the fact checker disagreed with. The "myth/fact" portion cropped in your post is actually from the targeted article, and the Snopes fact checker actually agrees with the 'myth' part: 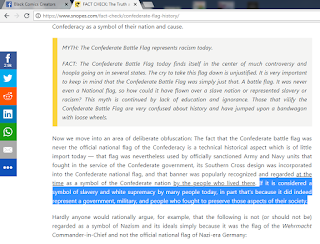 Muhammad Rasheed - Now it seems like you just deliberately tried to mislead me in an attempt to protect white supremacy while pretending racism is just a myth, and you did it in classic gaslighting fashion: 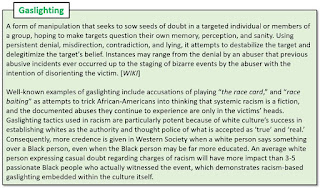 Muhammad Rasheed - Here's the truth of my stance: I see no enemies among people for no reason than "because of the color of their skin," but because of their diabolical actions to support the anti-Black systemic racism that preys upon my people to feed the racist aristocracy. The "because of the color of their skin" is a spin line that racists use to protect the evil system that plunders wealth from Blacks. I don't dislike white people just because they are white people. I dislike specific sub-group of whites who want to increase the wealth gap because they are selfish evil monsters. If you don't identify with that sub-group, and hate anti-Black racism as much as I, then I have no reason to consider you my enemy even if you are white.