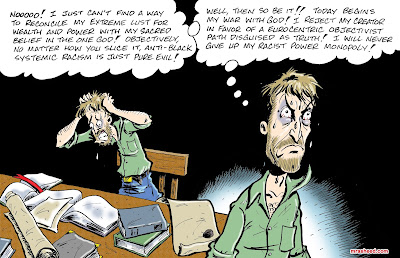 Roderick Bryant - I don't think that they tried that hard to reconcile their beliefs and desires; that would have taken too much time and energy...

Muhammad Rasheed - While I was drawing it today, I was debating whether I should actually have him wearing the garb of the 18th or 17th century. You make a good point. I'll have to revisit this one from a different angle.


"[The enslaved African race] had for more than a century before been regarded as beings of an inferior order, and altogether unfit to associate with the white race, either in social or political relations; and so far inferior, that they had no rights which the white man was bound to respect; and that the negro might justly and lawfully be reduced to slavery for his benefit. He was bought and sold, and treated as an ordinary article of merchandise and traffic, whenever a profit could be made by it." ~Roger B. Taney, Fifth Chief Justice of the United States Supreme Court (March 6, 1857)

Muhammad Rasheed - There were quite a few times when the entire slave economy edifice threatened to collapse due solely to the internal conscience conflict generated by the epic debates about it on the national stage. Whites definitely knew they were wrong, they definitely knew that the very people they permanently delegated to chattel along racial phenotype were the very "Moors" their ancestors looked upon in awe, and the pangs of conflicted morals were very real.

Ultimately, they ended up saving slavery because they were open to hearing greed-fueled barbaric justifications such as what Roger B. Taney, and perhaps most importantly, what Charles Colcock Jones, Sr., espoused: 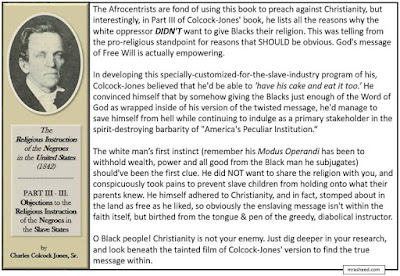 They needed SOMEONE to "make it right" and they didn't care if it made sense or was even true. They knew then as they do now that treating people badly in order to politically/economically elevate yourself is inherently evil.

Some white people feel guilty because they manage to break out of the White Supremacist Ideology Matrix—even just for a moment— and can look beyond the false propaganda designed to protect anti-Black systemic racism and see what’s real.
Posted by M. Rasheed at 10:46 PM