False Equivalency with a Side of Anecdotal & a Dash of Opportunistic 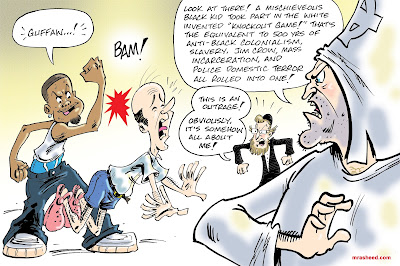 Q: As a black person, how would you feel if a white man shared with you that they were bullied on the street by a group of younger black men (singled out specifically and solely for being white), and that they’re struggling with how to cope with it?

Muhammad Rasheed - I would "feel" that the white man who so felt the burning need to share this with me was really, REALLY into the Anecdotal Logical Fallacy.

In the race-relations topic, this scheming and fallacious tactic is used by racists to attempt to create a false narrative that racism is a "both sides" problem, and that whites are just as much victims as Black people are. Of course this is nonsense, but it only works if the racist is successful in convincing an ignorant populace that racism should be cut off from its economic root cause, in order to confine it to a shallow "skin color prejudice only" definition which will serve only to protect white supremacy.

Muhammad Rasheed - @Ellis... It's a critique against the over-the-top mainstream and public response to the "knockout game" controversy, that oddly judges the collected incidents from an anti-Black, Black male criminality stereotype perspective despite the origin and trends of the 'game.'

Benjamin Israel - Typically I'm all for your comics, they're great. What's with the random insertion of the religious Jew?

Muhammad Rasheed - @Benjamin... He's not random at all according to the research around the "knockout game" controversy. A Brooklyn, NY Jewish community attempted to have the incidents labeled as 'hate crimes' because the ones in their neighborhoods predictably had Jewish victims. The judge wasn't buying the claim and thought it was a stretch, even with their active campaigning.

Benjamin Israel - Interesting, I didn't know that. Thank you for the information.

Muhammad Rasheed - No problem. Thanks for following my 'toons.  :)

Travis Wakeman - Is the "Knockout Game" predominantly a hate crime in the United States?

The mainstream media was merely eager to find a compelling story in a bunch of criminal incidents that would enable them to play up the criminalization of Black men propaganda that feeds the anti-Black for-profit prison industry. Other groups, taking advantage of the racially polarized climate, then tried to blow it up out of proportion in a clear effort to monetize the situation for their advantage as a grift scheme.
Posted by M. Rasheed at 10:29 PM