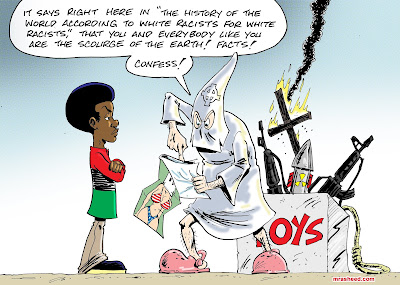 Q: Why do movements like "Black Lives Matter" refuse to acknowledge that Black-on-White crime is significantly higher than White-on-Black?

Muhammad Rasheed - It’s because the BLM fight is against systemic racism, which is the highly immoral and unethical sanctioning of human and civil rights violations into law or common practice by the dominant class aristocracy. That means there are anti-Black laws in place that shouldn’t be laws because greedy and unscrupulous racists control the systems.

So the worst and most frequent crimes committed are actually White-on-Black crimes at the institutional level—crimes that are approved by unethical authority and officially labeled as other than “crime”— while the lower rung people who support the crooked system pretend petty street crimes are the true problems in society.

The Truth about Black-on-Black Crime


"Violent crime in the United States has fallen sharply in the past 25 years. For the first time in a decade, violent crime in rural areas has surpassed the national average"

5 facts about crime in the U.S.

“Black-on-Black crime” has been dropping steadily for decades (with a huge boost taking place during the Obama era), while white-on-white crime has steadily increased.

How Toyota May Have Started Overcharging Minority Customers

Kenneth Andre Brown Sr. - You got a hell of a lot of views but only 3 upvotes. That’s strange to me. It says 1.6k Views.

Stephen Link - The Criminal Defense Bar here in Maine had an interesting “talk” with some of the members of the local media outlets about their reporting methods.

Many took offense to the papers running a story about a black out of state drug dealer coming into Maine. This was such a point that our Governor had commented about this, and has brought it up many times as hallmark of Maine’s drug problem.

What wasn’t mentioned was the 8 other drug dealers on the same docket call: all white, all local.