Flipping Over the Chess Board 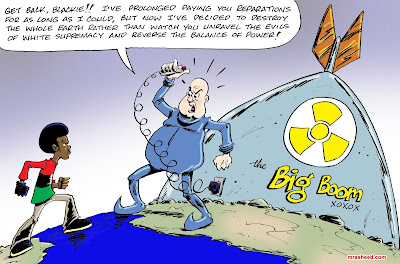 El Mowafaq Shash - What would be a surefire way for humanity to kill every living organism on Earth, including itself?

Muhammad Rasheed - lol uhhh… before we start playing around with those kind of desperate scenarios, let me propose an alternative plan for those bent with this kind of mindset (I think I know where this is coming from… hear me out).

You’re feeling backed into a corner and want to detonate a trillion nuclear bombs at once (or whatever else is going on in your heads) because you don’t want the white supremacist era to end. You feel an overwhelming anxiety over just the very idea that systemic racism will be dismantled, Reparations Justice will be paid out to Black people enabling them to compete on a full socio-politico-economic footing with the former guardians of the White Supremacist Ideology and you can’t take it. This includes any members of the People of Color (POC)™ community who have allowed yourselves to be brainwashed into the “If you can’t beat ‘em, join ‘em” mentality, by the way.

Instead of acting out the ultimate psychotic expression of privileged entitlement (“If I can’t have the earth all to myself, THEN NO ONE WILL HAVE IT!!!!”), how about you lot pack up all of your stuff (YOUR stuff mind you; not the stuff you stole during your half millennium of colonialist conquering/pillaging/raping/exploiting/plundering) and get one of your “Bold, New Frontier” minded mega-corporations to send you to Mars or wherever to start anew? That way you won’t have to freak out whenever some Social Justice Warrior calls you out on your selfish foolishness, and make you feel guilty by continuously bringing up your cycling selfish, sociopathic history.


See Also: A Classic Case of Someone Who's Never Had Sh*t Coming Into Wealth
Posted by M. Rasheed at 10:22 PM