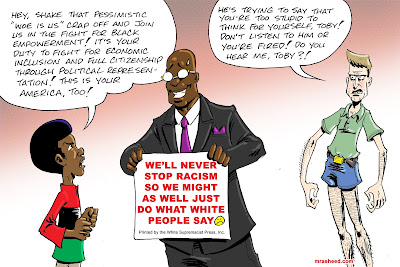 Q: Do conservatives/Republicans actually believe liberals/Democrats are more racist against blacks, or is that a strategically deployed lie?

Muhammad Rasheed - Of course they really believe it. White conservatives are aware that both they and their white liberal counterparts hold documented records of anti-Black systemic racism against the Black American people. Naturally the one group will think that it’s own abuses are magically not as bad as that of its rival, but systemic racism is definitely a bipartisan effort.

If anything the liberal version is just more passive aggressive than the conservatives’ more ‘lynchy’ version.
Posted by M. Rasheed at 9:55 PM