The Dubious Value of a Pig's Appraisal 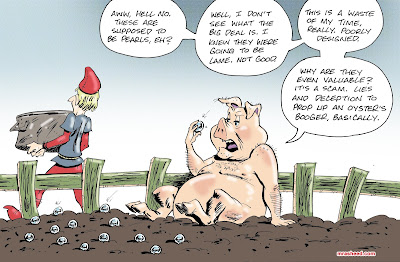 Anthony Fleming - Have you ever read the Quran? Is it a good book?

Muhammad Rasheed - Aye. I read it once a year during the month of Ramadan, and it is the BEST Book. The most important work of literature on earth since it is the revealed message of the One God of Abraham delivered to guide humankind to salvation.

Those who reject it were closed to the Qur'an's wonders before they even picked it up and knew not what they truly held (see: "Casting pearls before swine").

Tica Mcgarity - The pearls before swine meme is about offering something valuable to someone who is incapable of appreciating it.

Muhammad Rasheed - Do you get the impression that something other than that is what is being depicted, Tica?

Tica Mcgarity - Your message seems to be ambiguous. What do the pearls represent? Who is the pig depicting?

Tica Mcgarity - Jesus made the analogy first. He was telling his followers not to give holy things to people who have no love or respect for things that are holy. You have met the sort... the folks who would rather win a pointless argument that assist someone in need.

Muhammad Rasheed - As depicted, the cartoon is illustrating the saying, so I fail to see where the ambiguity lay. For the exact messaging I drew it for, Tica, you may click the attached blog link. :)
Posted by M. Rasheed at 10:42 PM