Casting Calls on the Whitopia Set 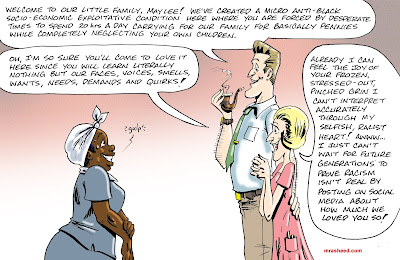 Muhammad Rasheed - Cartoon depicting the 'slavery lite' conditions of the Black American domestic worker with the corresponding evil justifications and delusions the exploiter invented for their illusion script.

Kevin KyteSketch Haynes - Keep it coming...right now you the realest doin' it.

Q: Did some black slaves love their white slave owners?

Muhammad Rasheed - Of course. Even if they had a choice and could live in a prosperous Black neighborhood instead, the situations of servitude would create personal conditions where—assuming the slave didn’t deliberately harden his or her heart—would eventually develop genuine affection for the slave owner family. I’ve read some slave narratives where the former slaves would repeat ‘coonish’ comments about how they didn’t have a problem being a slave and how ‘massa’ was good to them and what not.

There are many accounts of how the abused in prison systems and domestic violence relations will develop mentally unhealthy neuroses that manifested as affection for the system and the abusers, so this shouldn’t be a surprise, nor should it be used to justify evil.

Tica Mcgarity - As a white woman living in a black neighborhood in the deep south ... you are completely out of touch with reality. Black people do not demean themselves any more than white people insult their own personal space and privacy in the way that you have depicted. Very wealthy white people hire European nannies and house keepers. Blacks are not welcome in their homes for the very reasons that your cartoon implies. A black subordinate would only create the illusion of racism. Much easier and cheaper to hire a white foreign exchange student ... and then send them home when you are through with them.

Muhammad Rasheed - Can you edit/proof this post so the message is clearer, please?

Tica Mcgarity - ethnic bigotry exist. Whites do NOT want to seem to be anti-black racists. Whites who hire servants... hire white servants. Blacks no longer put up with even the slightest appearance of being anyone's servant. Your cartoon does not show truth... therefor... it is not funny.

Muhammad Rasheed - Okay, I see what you were trying to say.

I believe there are white people who don't want to contribute to the anti-Black systemic racism culture of the West, but my cartoon was not addressing them. I encountered a thread a few days ago with the descendants of whites who hired exploited Black domestic workers and they expressed all the elements I satirized in my cartoon-of-the-day above.

So although I certainly appreciate you taking the time to provide your feedback, it actually doesn't have value for me that I could use to enhance my art. Basically, I wasn't targeting the specific, very narrow sub-group you are trying to protect.