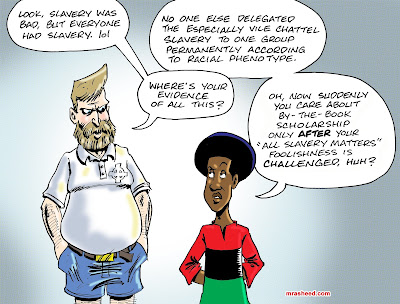 Q: Why do people say "get over slavery"?

Muhammad Rasheed - The primary reason is to avoid the national conversation that will open the door to dismantling slavery’s enduring legacy of anti-Black systemic racism. The logical fruit of that effort would lead to paying out 400 yrs worth of Reparations Justice in order to expedite building the Black community up and re-enfranchising them politically, for their economic inclusion as a group into mainstream society.

1.) Chattel slavery was the worse kind; this was the kind imposed on Black people in the West's "peculiar institution."

2.) The unique slavery form based on racial phenotype created the "whiteness" concept as a racist aristocracy. This was the birth of modern day "racism" as we know it. The strict dictionary definition only describes the common word usage among the populace, not the root cause meaning.

Christian Gunnerson - Muslims had far more black slaves then whites. Not only that, but the muslims castrated/sterilized their slaves so they couldnt reproduce.

Muhammad Rasheed - Hey, Mr. "Christian from Norway." Why are you posting this claptrap nonsense here? Why are you pretending to be an expert on "Muslim slavery"?

History of slavery in the Muslim world | Wikipedia

Muhammad Rasheed - lol You're an expert on spreading false propaganda. None of what you provided are facts.

1.) Slavery didn't begin during the Islamic era in Arabia, but had already been practiced for centuries among most Old World cultures. Slavery is mentioned in the bible's OT, the books of which predate Islam by thousands of years in many cases. This new concept that's been circulating claiming that Islam actually invented slavery is patently false. Your Ronald Segal is an anti-Islamic propagandist, not a scholar. You should learn to be more discerning and less racist.

2.) Because of the Qur'an's strong position of abolition as piety, chattel slavery was wiped out across the Muslim World early in its history. It was brought back hundreds of years later by greedy imperialists terrorizing across the Old World from Eastern Europe to Southeast Asia outside of the religion's instruction. Note that the radical villains of the ISIL terrorist group refer to the Islamic time period when slavery was gone as "a shameful abandonment," whilst celebrating the time when the unIslamic (but lucrative) practice returned.

3.) Since the Arabs themselves are a Black people, none of their modern slave taking is racial in origin, so despite the nature of the atrocity, it is still misdirection nonsense to attempt to distract from the West's anti-Black systemic racism (with its current Slavery 2.0 version in the for-profit prison industry) using this false equivalency fallacy.

Muhammad Rasheed - Not necessary. I can't clean up all the false information on the Internet by myself. The authors of such material will simply return the Wiki entry to the filthy cesspool state that attracted people like you.

Instead I will continue making my anti-racism cartoons and do my small part to fight the evil White Supremacist Ideology that continues to plague the world.

Christian Gunnerson - The article on wikipedia is factual tho. You can read about the horrors of islamic slave trade in most legitimate history book

Muhammad Rasheed - I just pointed out the areas where it wasn’t factual from my own expertise as an Islamic researcher into my own religion. You and Segal obviously don’t care enough to see pass your anti-Islam biases to be able to discern one way or the other. Or perhaps you can and you are merely on a professional anti-Islam troll campaign. Who knows? Either way, you bring no value here.
Posted by M. Rasheed at 10:23 PM