Reliving the Dark Deeds of Yesterday 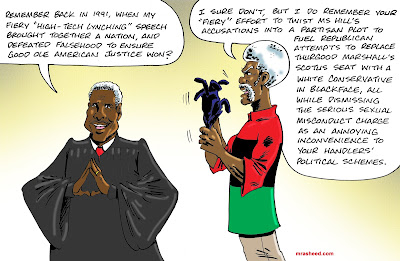 Jaylin Pringle - Who was telling the truth, Anita Hill or Clarence Thomas?

The Republican Party leaders were bulldozing through any and everything to get their guy in Thurgood Marshall’s old SCOTUS seat so they could score a major, high- stakes chess move. They weren’t going to let a little something like morality, ethics, decency, integrity, etc., get in the way of that. Have they ever?

Gerald Welch - The FBI investigated and found that Hill's claims were unfounded. That doesn't stop many even today on believing her, based primarily on political grounds. Had Thomas been an RBG type, none of this would have happened because for the longest time, even still today Rep. Ellison, Democrats are given the benefit of the doubt when it comes to sexual allegations.

White House Brief
In 1991, during his SCOTUS confirmation process, Clarence Thomas was accused of sexual misconduct by Anita Hill. His fiery response to the "high-tech lynching" is what everyone remembers. Thomas still sits on the Supreme Court to this day.


Muhammad Rasheed - It wasn't Thomas' "fiery" attempt to twist the accusations into a political grounds based partisan attack that I remember most, but how the Republicans were trying to replace Thurgood Marshall's old SCOTUS slot with a white conservative in blackface, all while dismissing Hill's testimony as an annoying inconvenience to their schemes.

Gerald Welch - So if you're not liberal, you're blackface? Really? Hill's testimony was investigated by the FBI and was found to be without merit, a fact that people leave out.

Muhammad Rasheed - Tell me how you feel about the FBI's investigation into the Hillary Emails thing, please.

Muhammad Rasheed - If you are a Black person who subscribes to the same political party and ideology that has the official endorsement of all of the domestic terrorist white supremacist groups, then yeah, that means you are a white conservative in blackface. Absolutely.

Gerald Welch - If you can't engage in an exchange of ideas without painting everyone with whom you disagree as a Nazi, then you have a problem.

Muhammad Rasheed - 1.) Tell me how you feel about the FBI's investigation into the Hillary Emails thing, please. I want to compare it to what you said about the Anita Hill FBI investigation.

2.) David Duke is on record saying he votes Republican and endorses Trump. The literal modern Nazi affiliate endorses Trump and self-describes themselves as "white conservatives." This isn't an abstract point.

Gerald Welch - My point is that I dread of debating issues, you're basically pointing you're finger and calling names. If I applied that standard, I'd call be calling liberals Che and Stalin and Mao

Gerald Welch - And be honest, can you RIGHT NOW store classifies Ingo on your home server? Can you then delete it after being subpoenaed for them and NOT be in prison?

A member of my own race subscribes to a party that consistently makes anti-Black political moves, and he supports this tradition. My ethnic group's literal enemy and hostile rival on the national stage aligns to that party, so "white conservative in blackface" is a deeper read than your dismissive "name calling." It's a full profile.

How about you be honest? Here's your chance.
Posted by M. Rasheed at 11:11 PM