Adventures in Privileged Entitlement: C'ing Your Way Into Intrusion 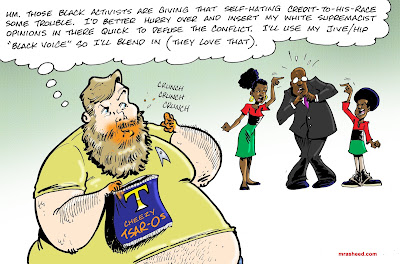 Hogan's Alley Poetry Festival - They eat Tsar-Os, study your culture and try to convince you that your culture is theirs. Culturally appropriative gluttony.

All the other Black male cartoonists and designers do those. I'm going after the untapped market.

Frederick Walton - @Muhammad... But I think Tony Parker makes a good point. AUNT JEMIMA'S should be discussed too

Muhammad Rasheed - I'm not saying the topic isn't worthy of discussion for those who'd like to discuss it. I'm saying it's not part of my brand. I know a million Black male artists who create works with that message. They're holding it down; they don't need my help.

Muhammad Rasheed - I would rather turn that lens inward and do a self-inspection on my own behavior as a Black male.

Mic Worthy - So good a job that Cale Spencer III reported the post! Geez, man. Avoid butthurt by simply scrolling by posts you don't like. Why give the post your attention? 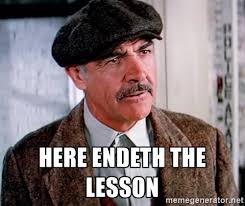 Cale Spencer III - When you tell someone their view is offensive yi u get your own cartoon character. So this guy draws cartoons telling other black people that if they don't agree with him they are a disgrace to the race. So when I told him that he was just as bad as any other racist he drew me.

Muhammad Rasheed - I actually said: "They can think different from me all they like, just don't think the way the dedicated enemy wants them to think."

Cale Spencer III - So who is the dedicated enemy?

Muhammad Rasheed - All those who support anti-Black systemic racism of course.

Cale Spencer III - so can you explain to me what you mean by that?

Muhammad Rasheed - What do you think it means?

Cale Spencer III - so you can't tell me what it means? I want to make sure I understand.

Muhammad Rasheed - Tell me what you think it means and I'll correct if you are off.

Muhammad Rasheed - Cale wrote: "so you can't tell me what it means?"

That sounds like you're fishing for another cartoon of yourself. That's just greedy, Cale. Stop.

Muhammad Rasheed - Tell me what you think it means and I'll correct if you are off. That's clearly not deflection. I want to see how close you are to accurately interpreting my comment.
Posted by M. Rasheed at 11:04 PM