The Established Rules of Engagement 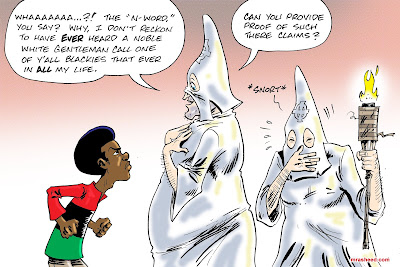 Muhammad Rasheed - It is very bigoted to proclaim all of one group is a thing if you actually mean it, sure (assuming you aren’t making a general philosophical point in which it is understood you don’t mean all of the members of that group). It’s also very bigoted to sloppily try to cover it up with an anecdotal fallacy, that usually sounds like: “But what if I saw a person that was doing the stereotype? Doesn’t that make it TRUE???”

Even though white conservatives do seem to operate within a precision hive mind goose step when it comes to their commitment to supporting anti-Black systemic racism, this is of course an illusion—they all are not like that. As is usually the case in most things, you have to carefully evaluate people on a case-by-case basis to confirm whether their behaviors align towards good or evil to be sure.

We can discuss later if the effort will actually be worth it.

Calvin Lipscomb - We degrades ourselves with the "n-word". Someone explain that.

Muhammad Rasheed -  I'm far more interested in why we allow white racist institutions to exploit us and plunder our wealth. The 'n-word' controversy goes in the "...but words will never hurt me" bag.

Muhammad Rasheed - I guess it's easier to create meaningless distractions to keep us from confronting the big, bad, scary real problems though.

Calvin Lipscomb - If you believe words and images are "meaningless distractions" there is nothing more to say.

Muhammad Rasheed - I know that:

1.) The Black community is politically disenfranchised and routinely plundered by systemic racism and brutalized by domestic terror

2.) Middle class Blacks would rather focus on the "n-word" instead of actual real world problems, presumably through coon-like cowardice.

Unless you care to have a serious discussion about #1 and stop buck-dancing around the literal meaningless distraction of #2, there certainly ISN'T anything to say.