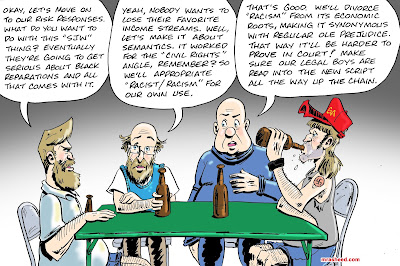 Muhammad Rasheed - The concept of racism is about 400 years old, and over these many generations it has become a normal aspect of Western society, but that doesn’t mean it is normal to do it as a species, no.

Racism as we know it was birthed specifically from the New World colonialist effort to spare the immigrant poor European peasant class from chattel slavery by delegating it to the Africans. Conspiring across socio-economic class lines to pull it off, this plan created the “white racist aristocracy” and is directly responsible for the immense wealth gap between the races. Note that pretty much every single decision made by white politicians in the last 400 yrs can be argued to support the racist aristocracy in some way—racism isn’t encouraged in public discussion, but it is always forefront in the minds of the nation’s leadership.

The strict dictionary definition of the term ‘racism’ only reflects the common usage of the general populace, which has made the word synonymous with regular ‘skin color’ prejudice. The white supremacist community have proven eager to take advantage of this fact in their gaslighting Internet trolling campaign to “prove” racism is a “both sides” issue.
Posted by M. Rasheed at 10:19 PM