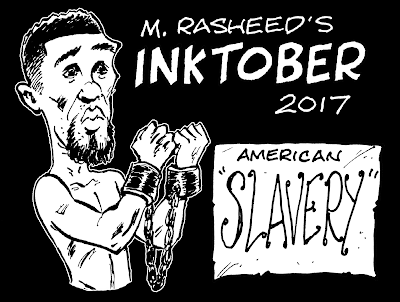 Muhammad Rasheed - I took part in the Inktober challenge this year! For those unfamiliar, it's a hashtag movement founded by cartoonist Jake Parker. Originally, in 2009, he made it as a month-long daily challenge to improve his own inking technique, but it quickly went viral and became a global thing. As I created each one of mine, I faithfully posted all 31 inked cartoons in this blog post.

After the first two prompt words leaned themselves pretty easily to the slavery theme, I decided at that point to sub-challenge myself to make all of them slavery related. It turned out to be an intense, dark, disturbing, very cleansing and even spiritual project for me. It even got stressful in the end when Facebook started banning me for posting over a couple of them, forcing me to create an alternate account to keep from missing the daily posting requirement. Yet I made it through, and in the end my very first participation in the Inktober event was very fun and (I think so anyway) successful.

Here were the rules and prompt list words for this year followed by my submissions: 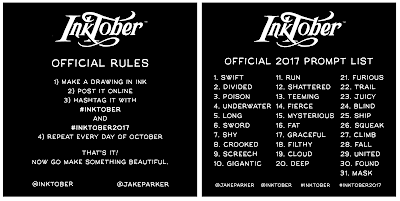