When Self-Hate Pretends to Be Love, pt 03 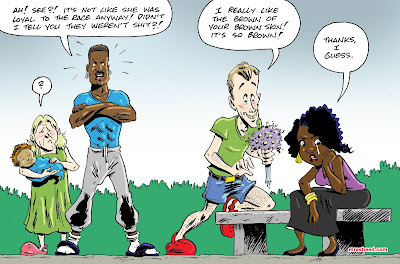 Q: Why do black/African men seem to prefer non-black women over black women?

Muhammad Rasheed - As much as some people would like the world to think the preference is simply natural & organic, which legitimizes the false Black women stereotypes of racist origins, it s highly unlikely that this is actually true.

As legendary entertainer Eartha Kitt recounted in a heartbreaking quote, Black men have been in the habit of going after white women as a tool of social status elevation for quite some time. This practice was formalized and greatly encouraged during the Civil Rights Era, deliberately politicizing interracial relationships as one of the high-profile symbols of “progress.” Combined with the white-controlled mass media’s relentless broadcasting of European beauty standards to indoctrinate the populace, I personally feel it’s nigh-impossible for a Black man to have a “natural” preference to dislike his own ethnic group’s women. The anti-Black/pro-white programming is too strong for anything like that to be anything other than an artificial influence on a weak, self-hating mind.

Qurhon Taylor - Hol up. This is one actually makes sense. At least to my interpretation.

Mahogany Rose Walker - LOOK AT THE DICK PRINT IN HIS GREY SWEATPANTS!!!!

Qurhon Taylor - JUST LOOK AT IT

Mahogany Rose Walker - And his abs. Omg they drew the ultimate member of wokebook

Sky Simmons - Wtf is this trying to say

Artemis Freeman - It actually has an explanation attached to it lol

Sky Simmons - Wait damn it do don’t it

Sky Simmons - That’s how I interpreted it too. Now that I know what it means I’m confused on what I thought it meant tbh

Christine B. Williams - It is really amazing how many Black MEN want The BLACQ WOMAN to look up to him YET he has NOT GIVEN THE BLACQ WOMAN ANYTHING TO LOOK UP TO. BUT PLEASE BLACK WOMAN DO NOT!! GIVE UP ON THE BLACK MAN AS A WHOLE. THEY HAVE BEEN TAUGHT THAT WHITE IS BETTER AND KEPT THE BLACK MAN/WOMAN NOT KNOWING. But the REAL TRUTH IS THEY SYSTEMATICALLY BRAINWASHED BOTH OF US. OUR HISTORY WAS STOLEN AND BEAT OUT OF US AND REPLACED WITH THEIR RELIGIONS TO BRING ABOUT MORE DIVISION. TOGETHER WE ARE AN UNSTOPPABLE FORCE AND WHITES KNOW THIS. IT IS MANY OF US WHO DO NOT KNOW OUR WORTH. PLEASE SUBSCRIBE TO THESE PEOPLE TO HELP YOU LEARN AND HEAL. Dr. Mambi Show from Kenya and The Advise Show TV in Houston. UNITED is how we WIN OVER IGNORANCE. WE ARE ONE. Peace and love to you all. It is time to wake up our BLACK PEOPLE ALL OVER THE world. AFRICA NEEDS US UNITED.