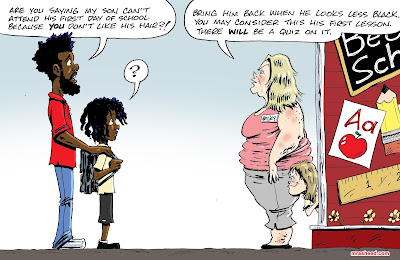 Brianna Ruffin - What is it like to grow up as a black person in a mostly white community in the United States?

Muhammad Rasheed - In Rich Benjamin's Whitopia TEDTalk, he quoted the sentiment expressed by the hosts who allowed him to interview them:


"One black man is a delightful dinner guest; 50 black men is a ghetto."

White communities are traditionally very protective of their closed-in, white racist aristocracy, and expend a great deal of time attempting to control the Black people that find themselves within that reach. Consequently, Black people routinely experience continuous aggressive behavior — that range from the brutal, white supremacist ‘lynchings by cop,’ all the way to the more frequent micro-aggression harassment — that force them to be in a high-alert, semi-paranoia, stressful state the majority of the time. It’s been this way since the founding of the country.

Joshua Hodge - Why aren’t there any Blacktopias?

Goshen Mosby - I wonder how well a white person might do in a predominantly black community?

Muhammad Rasheed - They would make her president of the NAACP chapter.

As you are probably already aware, racism simply doesn't exist in black communities.

Exactly how can this be logically assumed? I’d say a white communities are traditionally ignorant of other cultures’ problems as most cultures are. If you were hoping to somehow influence them to dismantle this system, then insulting them for things they didn’t know they were doing is not the way to gain an ally, it’s how you make enemies. Approach is everything. One must be willing to teach before any are willing to learn, and you’ve made it clear your past the point of teaching and are instead pushing a radicalism agenda down there throat and ordering them to swallow. You can lead a horse to water, but you cannot make it drink… especially when that horse has protection under law saying it does not have to drink.

Muhammad Rasheed - You’re saying that if I would only just take my hat in hand, look at the floor and adopt a submissive posture when I kindly ask you to finally stop subjugating, exploiting and plundering my people, that you will be more likely to comply with my wishes. I find this opinion difficult to accept at face value.

Marc Ian Payne - Respectfully, I disagree that Mr. Rasheed is pushing a radical agenda. He utilizes language that is not conciliatory, unapologetically. He could have said “Some ‘Whites’ attempt to maintain distance from Persons of Color by creating insular, gated communities facilitated by the practice of modern redlining.” This is functionally the same statement. That does not change the veracity of the statement.

Muhammad Rasheed - Marc, tell them that if they dismantle anti-Black systemic racism and payout Reparations to the American Descendants of Slavery (ADOS) then I promise to soften my tone so they won’t get triggered as much.

Michael Rasinski - You assume things that are unfair to assume and accuse people of things they cannot be expected to know. Just below you refer to white people is "them". Like your sorting an item, a thing, a lifeless designation for a being undeserving of a name. It's not okay. Like you've drawn a line between people and asked them to somehow be closer together. I hate when people assume things of other people that they don't have the evidence to prove. I try to assume the best in people. There are two sides to each story.

I have sympathy for German soldiers in WW2, the "terrorists" from the Middle East, people who wave the confederate flag for their ancestry, and Gay pride for wanting to be excepted. Yet I have trouble sympathizing with you.

Since I criticized you a while back I've continued to check your comics. They never really change. The American-Africans are displayed as righteous and good and their cause always seems just. They are often being physically harmed or personally insulted. The White American is always displayed as wrong, blatantly ignorant, stupid, and mostly, privileged. They are often fat, bald, and willingly taking part in some heinous and racist act. When I've questioned your more radical approach I receive the same links, the same response, It's an echo chamber. I love hearing the other side of the story, yet many stories I've found for the reparations are stories of events long past. Pain caused by dead people, dead societies, dead ways of life, and a dying ideology. It's history and I believe you are free from your parents mistakes because your blood doesn't define who you are. I'm getting off track as always, but the point is that your view is an opinion, just as mine is. Neither of us are for certain right not wrong. As I write this I wonder if I myself am wrong. If you are truly passionate about something you will never stop questioning it.

The second part is: This country is a Republic, not a democracy. This means that laws and actions of the government are not a reflection of the people in it. We're lucky if half the people vote who are supposed to. Those who vote consistently are often the most radical and go for the most radical candidate. Basically, the fact that we have a republic and a two-party system means the people's voice is weak so that only the loudest are heard so it is unfair to account government actions as actions of the people.

Maybe it's just me, but your comics scream offensive. I suppose in the end, I want to see what drove you to cling to the past so desperately, what keeps you writing the way you do, but mostly, what makes you so sure you're right? Surely not every voice that doesn't concur with your view is wrong.

PS: I could care less if you use my name, or draw a depiction of me (I'm tall, lean, dirty blond with messy short hair), or decide to point out my spelling errors. I acknowledge each word I've ever written and will not delete it (unless my boss tells me too) as it reminds me that I can make mistakes, I can be wrong, and that what I write now may be wrong later. If I inspire a comic I'm depending on you to send it to me.

PSS: What's up with the tails?

Muhammad Rasheed - Michael wrote: “You assume things that are unfair to assume and accuse people of things they cannot be expected to know.”

I’m not assuming anything since my work here is backed by the body of scholarship literature. Since you admit to the knowledge deficiency on the topic, I suggest you work to fix it before passionately ranting at length in a public forum, since the demonstration does you little credit.

Michael wrote: “Just below you refer to white people is ‘them.’”

And I will continue to do so. I suggest you get over it.

Michael wrote: “It's not okay.”

Michael wrote: “Since I criticized you a while back I've continued to check your comics. They never really change.”

They’ll change once anti-Black systemic racism is dismantled and Reparations are paid out to the American Descendants of Slavery (ADOS). Insha’Allah.

Michael wrote: “Maybe it's just me, but your comics scream offensive."

White supremacy is MORE offensive. My work is the very necessary response to it.

Michael wrote: “I suppose in the end, I want to see what drove you to cling to the past so desperately…”

This is your severe knowledge deficit talking for you. Reading books can cure this ailment. White supremacy is a global blight that is now 500 yrs old and counting. It is hardly confined to the past.

Michael wrote: “What's up with the tails?”