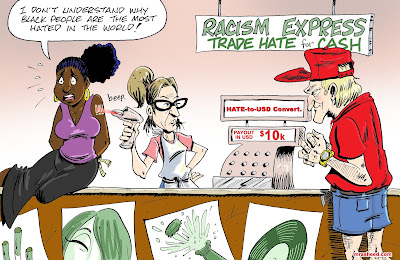 Q: Why have Black people been hated so much in Western countries?

Muhammad Rasheed - Hatred is part of the propaganda that supports anti-Black systemic racism. Racism is extremely lucrative as it has fueled the hoarded great wealth of the West, so in order to keep that obscene gravy train going, the people who manage and maintain the system needed to be indoctrinated in a hate mentality—White Supremacist Ideology—to help them justify in their own minds why it’s okay to do this to people.

Kanika - I swear! Black people are the most hated race. Anti-black racism in every country on earth and there is a derogatory term for Black people in every language.


JettaB - And we have done NOTHING to deserve such hatred...we’re not the problem THEY are.

Chuck Hammond - If that isn't racist I don't know what is. If I posted liked that in words, I be kicked off FB but yours is considered art.

Muhammad Rasheed - Kanika and JettaB are expressing the same thing in words.

Chuck Hammond - Good retort. By the way, even if I don't like most of your toons, I do appreciate good drawing and you always have a bite to your commentary no matter the target.

Muhammad Rasheed - I think that's literally the highest compliment that my ideological opposition can give me. Thank you.

I’m not going to keep saying this, but I have to say I love the art work. Visuals always work. That’s cool to be able to draw almost anything like that. I can draw so maybe I need to practice more. You have a good imagination as well in order to draw what you think. That’s really outstanding.

Don Howard - Racial prejudice is a great evil. Those who are prejudiced because of race are just showing how monumentally stupid they are.

Muhammad Rasheed - They're showing how monumentally willing they are to do anything to hoard wealth & power.

Don Howard - But a lot of the most prejudiced people are dirt poor and uneducated. They have no wealth and no power.

Muhammad Rasheed - Yes, but that's low on the totem pole of systemic racism. In a society in which racial prejudice is the life blood of the core economic system, they receive SOME benefit from agreeing to abuse the most politically and economically disenfranchised group.

"With us the two great divisions of society are not the rich and poor, but white and black; and all the former, the poor as well as the rich, belong to the upper class, and are respected and treated as equals." ~Senator John C. Calhoun (1848)