Giving Away Your Tells 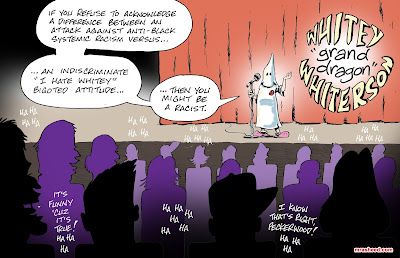 Xylon Ferrell - @Muhammad... Ok, i have read alot of your cartoons.....this one makes the least sense. Stop trying to appeal to white intellectuals who could give a shit. If the people you are trying represent don't get it or give a fuck, you are literally just doing this for your own amusement which doesn't mean a damn thing.

Nolan Werner - @Muhammad... Your comics are something else man. I have to admit that I've never seen anything like them. Surely some paper wants to pick them up to get people talking

Jason Pell - Whitey Whiterson is my pen name. Maybe I should rethink that...

Muhammad Rasheed - @Xylon... Both the people I represent and my critics often don't agree with my view point, such is the subjective nature of art. The point isn't to be a worry-wart perfectionist and drive myself crazy trying to futilely knock them out of the park every time. My goal is only to express myself honestly using my chosen medium to get my message out into the world, and to do so as often and consistently as I can. That's all.

I do not expect you to get them all, but I do appreciate your interest and feedback when you are moved to provide it. Thank you.
Posted by M. Rasheed at 10:35 PM