An Artificially-Imposed Burden of Choice 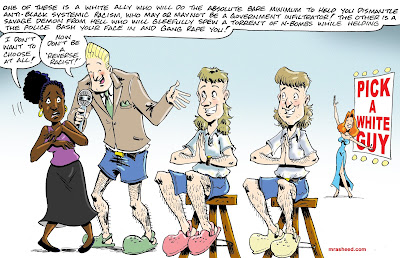 Q: Why do people think it's okay to be racist to white people?

Muhammad Rasheed - I’m unconvinced that anyone does think its okay to be racist to white people. I do think it’s important for politically disenfranchised and economically excluded groups to pushback against the anti-Black systemic racism inflicted upon Black people by whites. This is often mistaken for ‘racism’ or ‘reverse racism’ by whites who aren’t comfortable with the pushback and are confused as to how to respond. They oddly tend to interpret the very idea of an equal social-political society—in which they would lose all of their ill-gotten privileges/entitlements over Black people—as a form of ‘hatred,’ which generates questions like this one.

Craig Florence - Muhammad doesn’t appear to respond to comments, favoring perhaps to let the art speak for itself, which I can respect. I also respect that he is trying to empower people of color through his political cartoons. Perhaps I’m reading this one wrong, but I’ve noticed a pattern with the messages his work conveys that suggests “white allies” are phony or not to be trusted or even outright hostile. I guess I’m just genuinely curious to see how many people feel that way, it seems as if Muhammad is suggesting blacks and whites should remain separate and uninvolved. Am I misreading this? Can a white person in your view be an ally? Or are whites by default an enemy of the cause?

Muhammad Rasheed - @Craig... It's not impossible for white allies to be genuine. The problems shown in the record reveal that whites on both sides of the partisan divide have been very protective of anti-Black systemic racism, particularly within the last 50 yrs in the toxic Integrationalist Assimilated Tokenism era.

Investigative reporter Greg Palast — who broke open the nature of voter suppression in the modern era — is a genuine white ally doing excellent work. Interestingly, when I brought up his name in a thread full of white liberals, he was immediately vilified, his great works downplayed, and my intelligence was attacked for not ignoring Palast just because they agreed among themselves that it should be done based on some petty beef one of the white liberals had with Palast's go-to book illustrator contractor.

In order to be a white ally, the candidate's fruit needs to actually reflect it. Taking such claims purely on the power of a white person's shallow declaration has proven to be toxic for Black people. For the truly sincere truth seeking white, who longs to do real great works in the field of anti-racism, I think he/she should start here: Finding Myself in the Story of Race | Debby Irving | TEDx Fenway

Craig Florence - Thank you for taking the time to give me a clear and thoughtful response. I’m glad to have the information to check out and I hope it will benefit others as well. Unfortunately in these comment threads it can turn unruly quickly when misunderstanding and poor communication win out.

Peter Nack - Muhammad, you know of Emmett Till, of course, and we both know that Black Folk were pounded-- South and North. But do you know Schwerner, Channey and Goodman; Viiola Liuzzo, William Munney, et.al when you drew the cartoon? .... Should you forget, or never have known about them, because of the rightward reaction among whites (Northern) after the mid-Sixties . ..... You do not seem to allow that I -- old, Liberal, Jewish, Northern -- cannot be an ally, cannot understand the Movement unfinished or #blacklivesmatter.

Muhammad Rasheed - Peter, hyperbole is a normal and accepted part of the editorial cartoonist's tool kit. I have no desire nor inclination to dial it back because you want to be in your feels about it.

Dismantle anti-Black systemic racism and get me my Reparations payout, and I promise to reconsider. Outside of that then I suggest you look away or Block me if it's too much for you.

Traces of the Trade - Cuban segment
Posted by M. Rasheed at 2:39 AM