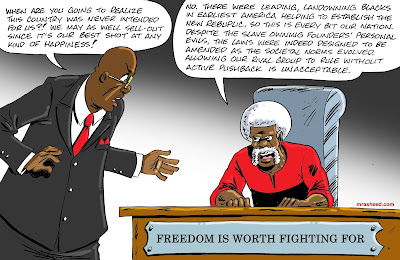 Barry Bookhart - Why do some white Americans tell black Americans to get over slavery?

Muhammad Rasheed - It’s not just slavery. The evil ‘instruction’ also spitefully implies that we get over the continued effects and sequels of anti-Black chattel slavery like jim crow, voter suppression tactics, mass incarceration and all other ways the white racist aristocracy has inflicted disenfranchisement and economic exclusion upon the Black American ethnic group.

The reason for telling Black people this is embedded within the comment and decoded thusly:


“Get over the wrongs we whites do to you Blacks because we’re never going to stop abusing and exploiting you. You should just get used to it and accept this as your permanent normal.”

Whites hope to not only continue plundering the wealth of Blacks to perpetually continue widening the infamous wealth gap, but they also hope to avoid the economic justice of Reparations that will make up for the centuries long evils of systemic racism.
Posted by M. Rasheed at 10:09 PM