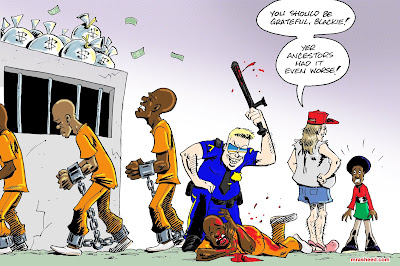 Baljeet Kaur - How is mass incarceration related to slavery?

Muhammad Rasheed - The great wealth of Western Civilization was built upon the anti-Black slave institution, and when slavery was abolished, it collapsed the American economy. The 1% legacy families that control the majority of society’s wealth were desperate to replace their gravy train streams of revenue, and they did so by exploiting the 13th Amendment loophole:


"Neither slavery nor involuntary servitude, except as a punishment for crime whereof the party shall have been duly convicted, shall exist within the United States, or any place subject to their jurisdiction."

This effectively returned Blacks to slavery, particularly the vulnerable poor who were seized off the streets on frivolous charges. Interestingly, it was the North who held onto mass incarceration while the South used jim crow subjugation, but the jim crow conditions ironically enabled Black people to build and control their own wealth within the limits of the closed in systems where by law they were limited to how much of the Black dollar they were allowed to spend on white goods and services. Once jim crow was abolished at the signing of the 1964 Civil Rights Act, the South leaped at taking on the mas incarceration money maker for itself. Since then, corporations and politicians have schemed to increase the scope and force of this evil blight upon the Black community, and now it is rapidly approaching the wealth generating super business of its chattel slavery ancestor.

Christian Couture - I fail to understand the meaning of these drawings...  Is it to promote history or hate?

Muhammad Rasheed - Christian wrote: "I fail to understand the meaning of these drawings..."

The mainstream, dominant culture doesn't like to promote a dialogue about the nation's most enduring sin, since the economy is actually fed by anti-Black racism. The mass incarceration industry is just one of the ways the original slave economy revenue was replaced, for example. Consequently, the norm is for people to discourage talking about racism in hopes that the lack of dialogue will keep it going forever while a new narrative is created to protect it.

Naturally this practice only benefits the white racist aristocracy. My cartoons are designed to make people talk about the anti-Black systemic racism that lays at the heart of Western Civilization as a whole, and is the foundation of U.S. American society in specific. I prefer we discuss the actual economic-based root cause of racism, and not the surface-level "prejudice over skin color" marketing piece of it promoted by those trying to protect white supremacy.

I hope this helps!

Will Lester - If you're saying that all cops are racist and abusive. You're wrong on so so many levels

Brandon Bitros - All are abusive. They all put non violent people into cages. All of them

Timothy Brown - It honestly doesn't matter if there are good cops or not when the entire institution holds a very clear racial bias and the "good cops" do nothing to combat it.

Will Lester - All are not abusive. I've met many police that are respectful. The problem isn't the police.

Brandon Bitros - They ALL put non violent people in cages. ALL of them

Will Lester - Brandon... Criminals can be nonviolent bro....

Timothy Brown - Will... your missing the point. Just because you've met some good cops doesn't mean the institution they belong to isn't biased and racist. You're also not taking into consideration the privledge your skin color grants you with police.

Will Lester - @Timothy... The United States police forces aren't perfect. You're stereotyping them by all the bad cops. You see a couple bad cops and think "Man all cops are racists and beat black people." This drawing speaks truth but the police forces can't be perfect because no one is. So instead of bashing the unit as a whole support the good. Because I know for a fact that good cops extremely EXTREMELY outweighs the bad cops.

Will Lester - Timothy... The real police brutalities are towards the ones that

1. Are respectful to authority
2. Obey authority
And
3. Didn't have a criminal record

Muhammad Rasheed - Will, did you see all of those "80%" statistic numbers Tim posted? Are you really going to just step over them to talk at him with your well-rehearsed pet rhetoric? 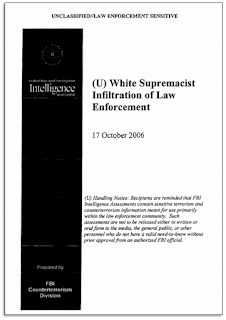 Will Lester - But instead of thinking logically you're just going to try and prove me wrong instead of looking at facts.

Muhammad Rasheed - He posted the facts and you side-stepped them.

Will Lester - How many of them were criminals?

Timothy Brown - Not to mention all the videos of police killing black people literally for following their directions. Did you forget about Philando Castille who was shot because he told a police officer he has a legal conceal and carry and then proceeded to follow the police officer's directions and reaches for his license and registration. He was shot and killed in front of his girlfriend and her daughter for reaching for his license and registration. But police force only happens when people don't listen and are disrespectful right?

Timothy Brown - @Will... do I need to explain why crime is such a problem in low income black communities again or did or ignore those facts in favor of own view that's not based in reality?

Timothy Brown - Or how about the black kid who was shot for literally playing outside with a toy gun?

Timothy Brown - And did you forget about the black man that was shot and killed for making a phone call in his grandma's backyard too?

Timothy Brown - @Will... you need to pull your head out of your ads and take your own advice to look logically at the facts and statistics.

But this is supposed to be the superior race, amirite?

Muhammad Rasheed - "Violent crime in the United States has fallen sharply in the past 25 years. For the first time in a decade, violent crime in rural areas has surpassed the national average"