Notes While Observing: The Descendants of Yakub 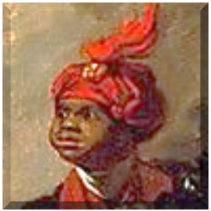 Muhammad Rasheed - One of the mythical tales that W.D. Fard and Elijah Muhammad would tell the initiates into The Lost-Found Nation of Islam in the Wilderness of North America organization, was the story of Yakub, the "big-headed scientist." In ancient times past, when the Black Man was at the height of his powers and ruled the world using wisdom, righteousness, and his mastery of the Sciences, Yakub was the renegade trickster figure. Within the tale it was he, with his unusually large head and a penchant for equally large wrong-headed mischief, who created  the albinoid White race in his laboratories.  If you're even a little familiar with the general ideology of Elijah's Nation of Islam, then you know it was all down hill from there. Created from the beginning to be literal 'devils,' the Caucasian ethnic groups would eventually spread around the world their violent and exploitative savagery under the banner of White Supremacy.

Taught to the 'lost' Black American during the worst of jim crow's lynching era, it shouldn't be too difficult to see why such a tale would make 100% sense to the incoming recruits. And as referenced within other Notes of this series, equally attractive was the fact that the European's Western Civilization was built upon the lore inherited from the previous Black Civilization, that the Whites have taken pains to cover up as part of their justification for chattel slavery and jim crow subjugation of Blacks.

For myself, growing up in a society that insisted the Black race was nothing, the discovery that it was the Blacks that taught Whites all their plagiarized lore was always a source of bittersweet pride. Far from thinking that the Yakub story was literally true, I did recognize that the NOI founders painted the mythical figure as a bad guy based solely on how Whites have behaved towards their ethnic rivals. In real life, I casually assumed that the groups of civilizing Blacks that so generously taught the Europeans the Sciences and civilizing arts throughout the ages did so from a purely altruistic motive, and they had no idea that Whites would eventually use their new powers to spread their death cult around the globe.

But what if they did?  What if the ancient Blacks DID know?

What if that's exactly what they wanted? What if -- just as Fard and Elijah had empowered the early 20th century Blacks with their NOI ideologies -- the ancient Black missionary scientists previously had empowered the savage, cave dwelling Whites with the indoctrination that taught them to conquer the world? What if civilizing figures like the Blackamoors, and before them the ancient Blacks that so enamored the Greeks that they worshiped the Africans as man-gods, were playing some kind of grand chess game, and had deliberately weaponized the Europeans against an ancient rival-enemy? In other words, Yakub represented the ultimate secret society of an ages old group of powerful Blacks who are playing war games with another mysterious group? 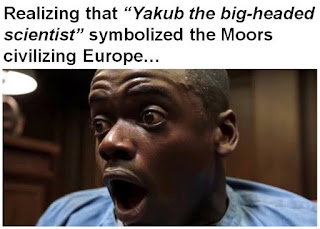 With this concept whipping back and forth in my mind like a fish struggling in a net, I compared it to the actions and attitudes of the modern, mainstream group of African-Americans. 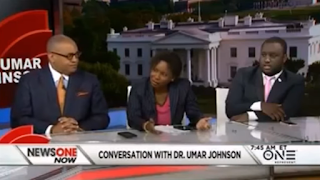 The suspicious rhetoric, decisions and actions of this dominant Black Tribe that holds themselves up as the 'face' of the Black American ethnic group don't exactly align with the stated goals of our slain Black leaders in the struggle. In fact, they often give the impression that they hate the goals of those leaders (and the modern day acolytes of those leaders), even while pretending to celebrate them during Black History Month.  At every step we turn, it is this tribe that tells us not to "rock the boat," not to demand Reparations, not to come together in a self-empowered community...

...basically they always talk us down from doing exactly what we need to do to succeed as a special interest group. 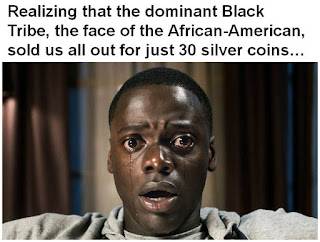 It reminds me of that not-so-cryptic Zora Neale Hurston quote: “All my skinfolk ain't kinfolk." In order to be truly free, socio-economically successful, economically-included, full citizens of this nation we helped build, the African-American is going to have to do so without the help of the dominant tribe that pretends to speak for all of us.  This one that abandoned his communities to 'integrate' into the White's as a permanent support class.  This one that partnered with the predatory Whites against his own poor.  This is the Black tribe that the Whites drew from when they needed assassins for our leaders. In order to be free, it's clear we're going to have to go around or through these agents who are resentful that they were born wearing our Black face. 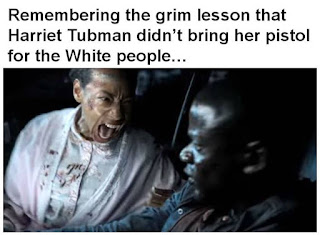 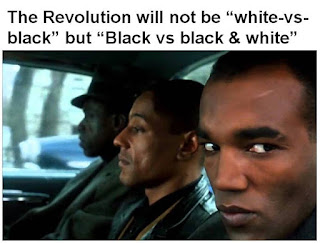 The modern dominant Black tribe, like the ancient Yakubian missionaries before them, remain over-eager to turn all their Black Excellence talents, skills, and intellect over to the Whites for their use. For some reason they seem to fear and hate the idea of using their power to build up themselves.

The dominant tribe of Black Americans are the 'mainstream' face of the African-American ethnic group, and they are the ones that sold us all out after the civil rights era, and sabotaged the noble efforts of the 1972 Black Political Convention in Gary, IN. It is they who sacrificed the Black poor and our group independence and freedoms, so that they could share in a piece of the hoarded spoils amassed by the White oppressor.

The dominant Black tribe is the one that admonishes us for being 'divisive' when we call Whites out on their evils, and who fears 'rocking the boat' because Whites may fire them from the "good jobs" of their permanent, subordinate support class. It's the tribe that demonstrably hates the idea of "Black-owned" anything, and will conspicuously withhold support from it gleefully hoping it will fail. That's the tribe that partners with Whites in calling the poor 'lazy & wasteful' while blaming them for their plight. It's the tribe that moans whenever Whites kill a random Black because they hate the feeling of cowardice at the certainty that they will do nothing about it. The dominant Black tribe is the one that agreed, in exchange for the signing of the Civil Rights Act, that they would look away as our leaders were assassinated, and promised they would not demand Reparations and/or Economic Inclusion during the toxic & coonish 'Integration Era' that was baptized in the slain leaders' blood.

Why? Who ARE you that you so continuously betray your own? You cannot blame the mindset on American slavery, because you were ALWAYS like that!  Who are you really?
Posted by M. Rasheed at 10:55 PM