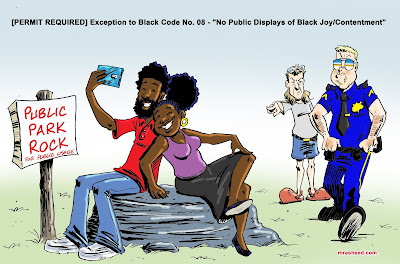 Cynthia Chan - Why do some white people call the police on black people even though black people have done nothing wrong?

Muhammad Rasheed - It’s an attempt to control Black people and make them feel powerless and fearful. It’s a form of domestic terror from an un-patriotic, hostile force that literally only cares about safe guarding the special privileges and protections they’ve created for themselves at the expense of other groups.

Muhammad Rasheed - I appreciate you.

Nick Davis - This is the best one yet, because you made a good saterical point without making it a lecture. Which helps reinforce your point better.

Muhammad Rasheed - Tomorrow there's another lecture one coming (I love those). Stand by...
Posted by M. Rasheed at 10:41 PM