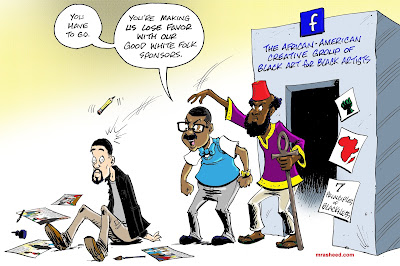 Kevin Grevioux - Just for my own edification, what are you trying to say?

Muhammad Rasheed - Just that it seems like a conflict of interest and counter-productive to push for pro-Black Awareness in the way it's presented but without the Black Empowerment & Economic Inclusion part that gives you the wealth and power inherent within your group to be independent and express yourself as honestly as you deserve.

"I can't express myself honestly from my own group's voice because an historically hostile alien group may get mad at us and withdraw support we require to survive on a basic level" is the natural fruit of the toxic Integrationist Assimilated Tokenism era.

Kevin Grevioux - I see what you mean.