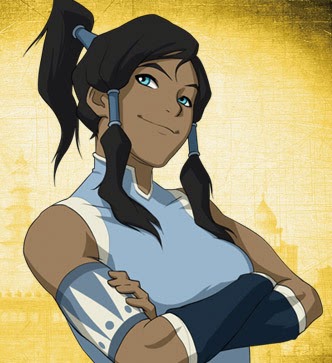 Muhammad Rasheed - [warning: spoilers] I enjoyed The Legend of Korra series over-all, and remain a big fan of the Avatar Universe. What it did right was the continuation of the world building, the strong characterization, the martial art-driven super powers, and the ability to make the viewer genuinely care about what is going on. This last can work against the series however, and cause the flaws to stand out as a taint, or an intrusion in a fan such as myself. There were a few inconsistent items in this latest series that stood out to me, making it inferior to Aang's adventures.


1.) Korra got beat up too much. The first series established the Avatar as THE badass in that world, so much so, that a 12 year old kid that had only mastered ONE bending discipline commanded a healthy respect from everybody, even Azula. By the end of the series, Aang had only half-assed learned the other three disciplines and still made people hesitate to challenge him. By contrast, Korra peaked in the first episode. It seems like the whole point of the story was to break her, to take her confidence from her, because she was never as badass as she was when she first arrived in Republic City and saved that store from that gang. The first series established that a fully-realized Avatar was a beast in combat, and we saw this little 12 year old, with only one discipline under him solid, kickin' ass. Naturally a 20 year old, who'd had significantly longer than one summer to master three disciplines would be a super confident, super badass, right? That's how Korra was when we met her, and it was all downhill from there. The way the cast was treating her in the finale ("Oh, you got this, huh? Yeah, right." [roll eyes]) was basically how I had gotten about her pretty quickly. I got TIRED of her making her moaning "I'm hurt" sound effect. I cared about her, sure, but I was very disappointed in how she turned out to be a fake toughie. At the end, when a wounded Kuvira is limping away because the giant mech they were fighting in exploded, Korra was calling after her to stop, that it was over, and I was like, "For what? You ain't the one that was beating her up. Why would she listen to you?" Korra was supposed to be more awesome than this. When Fire Lord Sozin dared to challenge Avatar Roku that time and got his ass hemmed up, that's what Avatar Korra should be like. Make the Avatar ALWAYS a badass as an unbreakable rule of that universe, and wrap the story around that fact. It's the Avatar's job to bring balance to the world, and it's possible the world of Avatar Korra needed compassion, so a cocky/selfish Avatar needed to be broken in order to give it to the world, but I disagree with how they went about it. A fully-realized Avatar needs to always be the baddest motherfucker in the room.

2.) A series this good deserves more than derivative hack job writing. It really does. The Avatar Universe pulls from the Asian cultures and rituals it's inspired by to create a unique and fascinating speculative fiction work that is truly art. They should embrace that, and work hard to create their own plot devices and tropes. Nothing pissed me off more than watching Korra go to Dagobah, the friggin' swamp planet, to talk to Yoda. The ONLY thing that saved the scene for me was the fact that the old Jedi master acted exactly like the world's greatest earth bender instead, and was a fan delight. It was really a waste; they could've taken the time to come up with their own unique way of introducing Toph back into the series without making me think of an entirely different movie, effectively pulling me out of the story. As a writer, why would I WANT you to stop thinking about my story that you are reading/watching, and make you think of someone else's story anyway? That's some lazy, ignorant nonsense.

3.) The Legend of Korra didn't flow as smoothly, and organically as the original series did. It was really stiff in presentation, and although it would be easy to blame that on the addition of the various socio-political critiques, and the symbolism of leaving behind the outdated paradigm of old traditionalism for modern Progressive ideas (which I'm fine with; please express yourself honestly in your art), I don't think that was it. The problem was probably just not taking the time that they took in the first series to make sure the script was right, so instead it felt like a rough outline of the message they wanted to convey. This also contributed, as another reviewer mentioned, to how Korra seemed to restart at the beginning of each book like she forgot everything she had just went through and learned in the previous adventure. Very frustrating, and the script took away from the character to give to the plot/message, which isn't as important as the character, in my opinion. The character is what makes me care about your story, and if you downplay that, then you are basically preaching at me. I don't turn on speculative fiction to get preached at, but to get lost in your world. You can give me your message, but it had better be wrapped in the challenges faced by Team Avatar, in the terror inflicted by Ko, or even in Prince Wu's singing.

But other than this, I am completely hooked still, and look forward to the Avatar's next incarnation.
Posted by M. Rasheed at 8:16 AM