The Inherent Wrong Within Defending Against Savage Hate 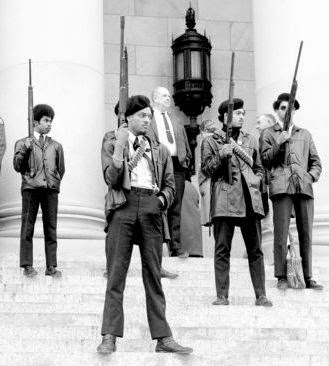 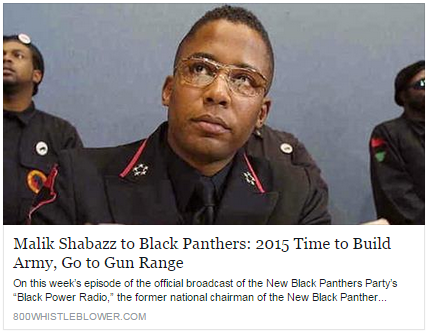 
Quentin Afrouk - No excuse for extremism of any kind Al. Two wrongs don't make a right.

D Lee Navin - With all the white supremacist "armies" militia that exist and their rights to form organizations, then it is just as right for the Blacks to form militias. I don't like any of them, but I can understand why the Black Panthers would like to build themselves up..... It is like we are living back in the 70s.......

Andrew Gamson - See? I agree with Quentin Afrouk...two wrongs dont make a right but two Wrights made an airplane.......but I digress. The issue is that the government and police need to keep an eye on both sides of the extremes of the political wings.....the danger there is palpable.

Chris Scruton - Armed black panthers in the 60s was what motivated Republicans of the day to favor gun control.

Debatenn Ufaith - I told you this isnt going to end well

Muhammad Rasheed - Assassinating black leaders in the 60s was what motivated the black youth of the day to favor gun control.

Chris Scruton - I think Louis Farrakhan has a point. (Unfortunately he tends to jab himself with it)

Muhammad Rasheed - I have no idea what Farrakhan's point is; I'm an orthodox Muslim.

Top notch stereotyping you performed there. I score it a 9.2

Self defense is wrong? In what way? You don't believe in defending yourself if someone burns a cross on your lawn, drags you out of the house and hangs you from a tree (or burns you alive) because your existence threatens their dominant social status? Tell me how defending yourself against a traditional psychotic evil is wrong?

Chris Scruton - No, seriously.I think Farrakhan is basically saying black people have to do it on their own. His militancy might get over the top, but I think he's correct on the bigger issue.Because there's a lot of racism in this country.

Muhammad Rasheed - Andrew Gamson wrote: "...two wrongs dont make a right [...] The issue is that the government and police need to keep an eye on both sides of the extremes of the political wings.....the danger there is palpable."

The police have been the enforcement arm for the exact institutionalized mindset that the Panthers need to defend themselves against. It is highly unlikely having them "keep an eye on both sides" will turn out well for the disenfranchised side.

lol You should've led with that, and tacked the joke onto the end of it.

Muhammad Rasheed - I apologize for saying you stereotyped.

Ken Krueger - Wow...I'm amazed at how little improv is being done.Sticking to the script right down the line.All this "who's badder than whom" BS is just going to get a lot of people killed for nothing.And it won't end the way these guys think it will.

Chris Scruton - Well, the cops are already killing people for nothing.Maybe they'll get the message when people start shooting back.

Muhammad Rasheed - It'll be an excuse to bring the military into those communities and wipe those people out once and for all.

Muhammad Rasheed - I suspect these over-aggressive cops are deliberately being assigned to those areas for exactly that reason, to trigger exactly those chains of events. #turnerDiaries

Ken Krueger - Muhammad is exactly right, and Chris, I don't know you, but I doubt you'll be standing to the right of Shabazz when the National Guard opens up.The Progressive movement has a habit of telling Black people one thing and doing something very different. But know this...ANYONE who says "Black lives matter" while talking up armed revolution is deeply confused.

Muhammad Rasheed - Government subsidized private prisons are Big Business. And the 1% have already proven they will do ANYTHING for more money.

Chris Scruton - Non-violent protest is always a good strategy.Getting the people out to VOTE is even better.

Chris Scruton - I'm not saying what people SHOULD do.But violence begets violence.And no, you won't see me there.I stay away from people with guns.

Muhammad Rasheed - I don't believe the non-violent strategy for repelling hate-filled aggression will work a second time in this country. There's a reason the media have ceased recording large groups of protesters.

"The Revolution will not be televised."

Muhammad Rasheed - They're planning a slaughter, and they will blame it on the victims as usual.

Ken Krueger - Muhammad, I knew Gil-Scott Heron a little bit...worked with him.There's a lot of irony to your use of the phrase, but I think you and I are the only ones who get this.I've continually been telling people that publicly antagonizing the cops is bad tactics. And for my trouble, I get called a racist, simply because I can see the stage craft here.It's strange when people are not only ignorant of history, but when confronted by it, deny the lesson. But here we are.I sense we disagree as to the most effective solution, but we both know what's coming...

That part doesn't matter. Harassing, and making the occasional lesson out of, the disenfranchised class is part of maintaining the dominant position in society. Obviously when the disenfranchised managed to get "the first black president" in the White House, they needed to be put back into their place in case they get some kind of uppity ideas like they were suddenly equal or something ridiculous like that.

Muhammad Rasheed - The Black Panthers are the natural response to that increased calculated hostility, as the first BP Party was birthed from the same situation in wake of the '60s assassinations.

Ken Krueger - The BP, like the modern Klan, is a minstrel show of scary images of racism.The strings are pulled in places we both know. Both are a distraction. If push ever comes to shove, their leaders' bodies will be used as props in the great passion play.

Muhammad Rasheed - But that's exactly what I'm saying. They will slaughter them -- off camera -- and blame the victims like they always do.

Muhammad Rasheed - They are deliberately antagonizing the people in those communities to set them off so they can Turner Diaries them.

Ken Krueger - Muhammad, I sent u a friend request. I'm nobody important, but so few people seem to see how we're ALL being used...pick up!

Ken Krueger - MRasheed, don't be naive...it's not all one-sided.Nothing in this long, sordid history ever was.There are the users and the used. They come in all colors. The REAL solution lies in the ability of some smart m-fers to see the big picture.You up to the challenge?

Muhammad Rasheed - 1.) Deliberately selecting cops with low IQs2.) Assigning cops with a demonstrated disdain for certain races/ethic groups into those same communities3.) Naturally the cops vs citizens conflicts sky-rocket4.) Community's citizens complain at the treatment and are literally made fun of ("I Can Breathe") by the cops in a deliberate antagonism5.) When the citizens eventually flare up to the point of No Return, the cops with military re-enforcement will gleefully slaughter them all.

Muhammad Rasheed - Ken Krueger wrote: "The REAL solution lies in the ability of some smart m-fers to see the big picture. You up to the challenge?"

Are you implying that you do see the big picture? Show me.

Rob Beckner - Mr Rasheed are you under the impression that YOU do? Show us

Muhammad Rasheed - ^Considering I'm not the one that challenged anyone to see the big picture (Ken did), by what justification are you using to direct that comment towards me and not him? What comment did I make that gave you that impression?

Al Bush - Only reason MR is that it's mostly white people who need convincing. My congressional district is represented by a Muslim Black man. Not a violence proponent. The demonization of the BP over the years is part of what drives this. White folks need a scapegoat and black folks need a strategy that takes the bait a little less. So we crank the pressure up. Anger the young and let them make the mistakes. A photo or quote out of context that is used to inflame and the hammer of what used to be hovers FBI but now will be Homeland Security. Forget the food served or children cared for, the education provided or the respectful relationships developed. But rest assured. Before there were BP there were police units well used to having their way with blacks and the poor. We have a history seldom told of of the standard things people don't want to discuss, racism and genocide not that far gone.

Mark Thiel - The NBPP, from what I have gleaned from personal remembrance and paying attention to old school activists like Lorenzo Kom'boa Ervin, is a bogus attempt to capitalize on the legacy of BPP and not to be taken seriously. I agreed completely with the BPP agenda and the rationale for the Deacons for Defense, but the NBPP...I dunno.

Chris Scruton - Social change comes from a mixture of conscience and fear.

Ken Krueger - It's a set-up

Al Bush - It's a problem to be solved.

We may pride ourselves on black friends, black neighbors, black history attendance and even drag out out best couple dozen when it suits. It's not the same as living a black experience. A black life.

I like Chris Ray and Muhammad Rasheed and Lorenzo Kom'boa Ervin as they all come close by me one time or another. Each contributes to my understanding but that's not the same as self empowerment.

You cannot hardly have it both ways. Preach personal responsibility then criticize the organized attempts, especially when they are no more disruptive than the ones we've historically used ourselves.

Robert Perez - The black on white race war you guys seem so willing to be understanding of May just lead to the ugliest all out race war we've seen in some time. This rhetoric has already fostered a pattern of cop killing, so why don’t we try toning it down a few notches before he'll shows up at all our doors.

Muhammad Rasheed - Robert Perez wrote: "The black on white race war you guys seem so willing to be understanding of..."

I personally find the idea that my right to defend against racist hate means that I want a "black on white race war" to be narrow-minded and offensive. Defending myself against uncalled for aggression is wrong to you?

Defending myself against aggressive actions based on how a person feels when they look at me, isn't an action of hate, it's an act of basic level self-preservation, from the bag of The Right to Bear Arms as the very reason that principle was established for Americans. Tell me: Are you saying that only your racial group has that right to self defend when your cops come into our neighborhoods with over-the-top aggression against petty crimes? Any and everything a black person does is worthy of Death by White Cop... that's the very clear message they are sending, and you say that it is unreasonable that we should exercise our Right to Bear Arms against this behavior.
Posted by M. Rasheed at 7:44 AM