Supporting Hebdo: A Cartoonist's Critique of a Critique 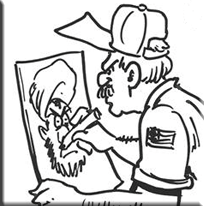 In the Facebook group called Cartoonist's Cafe, someone asked how was depicting bigoted and offensive cartoons of the religion of Islam supposed to be used to show awareness of the Je suis Charlie movement:

Kristopher Vangalis - So because I'm a cartoonist, does that give me a free pass to start posting a bunch of racist depiction of muslims now that extremists killed 12 people in France, or is that just the rest of this group?

It was an interesting thread with a lot of diverse views, including the extreme, ever-present, profanity-laced "Kill 'em all and let God sort 'em out!" variety from the right wing American type.  At a certain point, I stopped typing so much and started posting cartoons of my views as my responses instead: 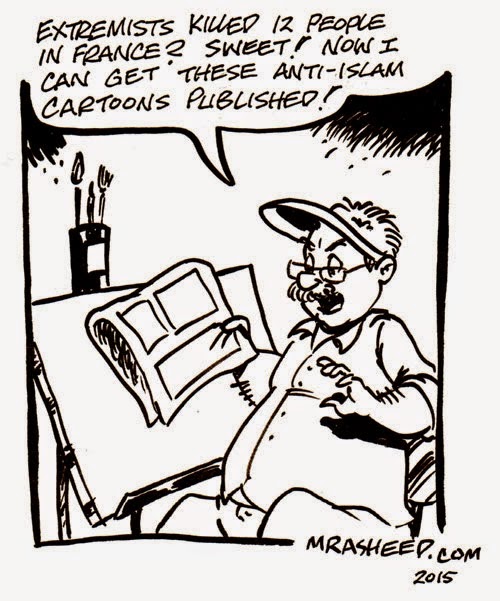 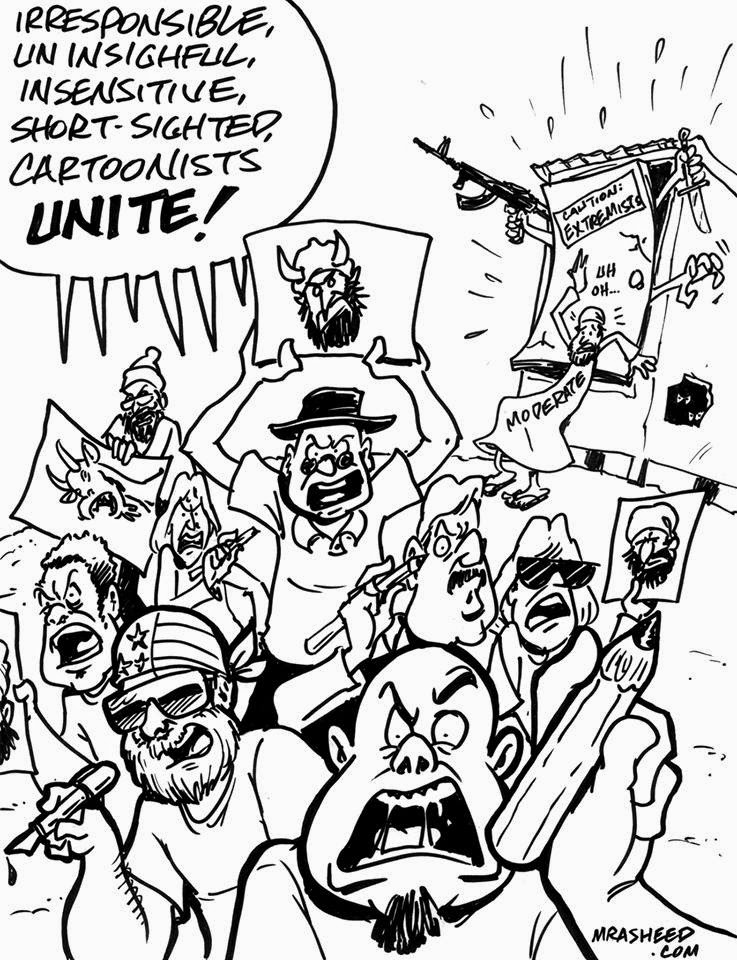 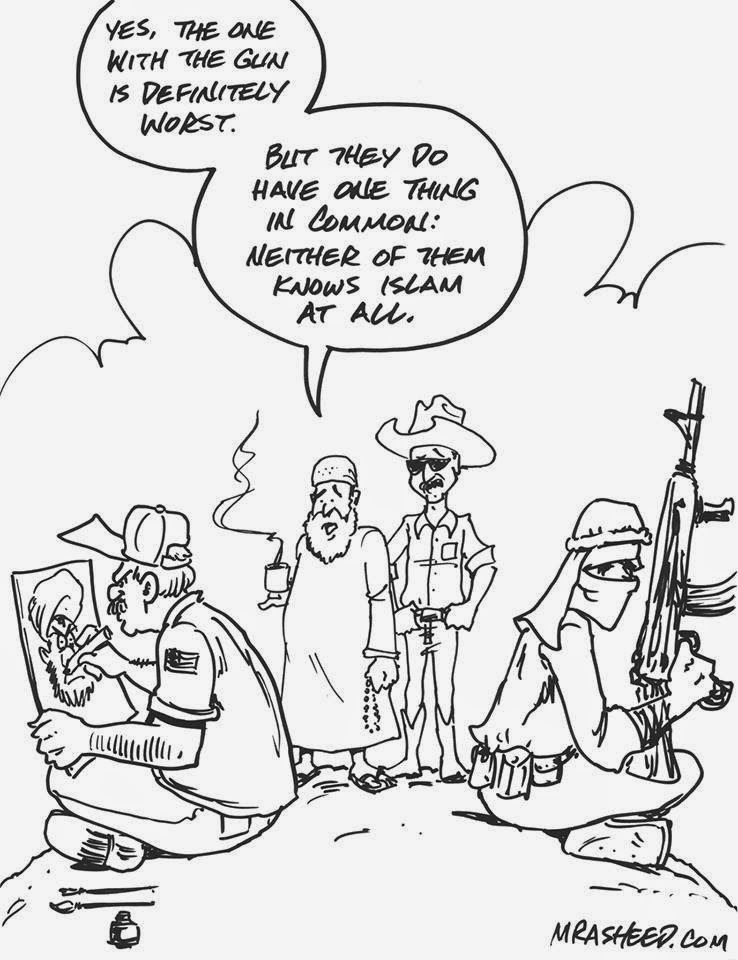 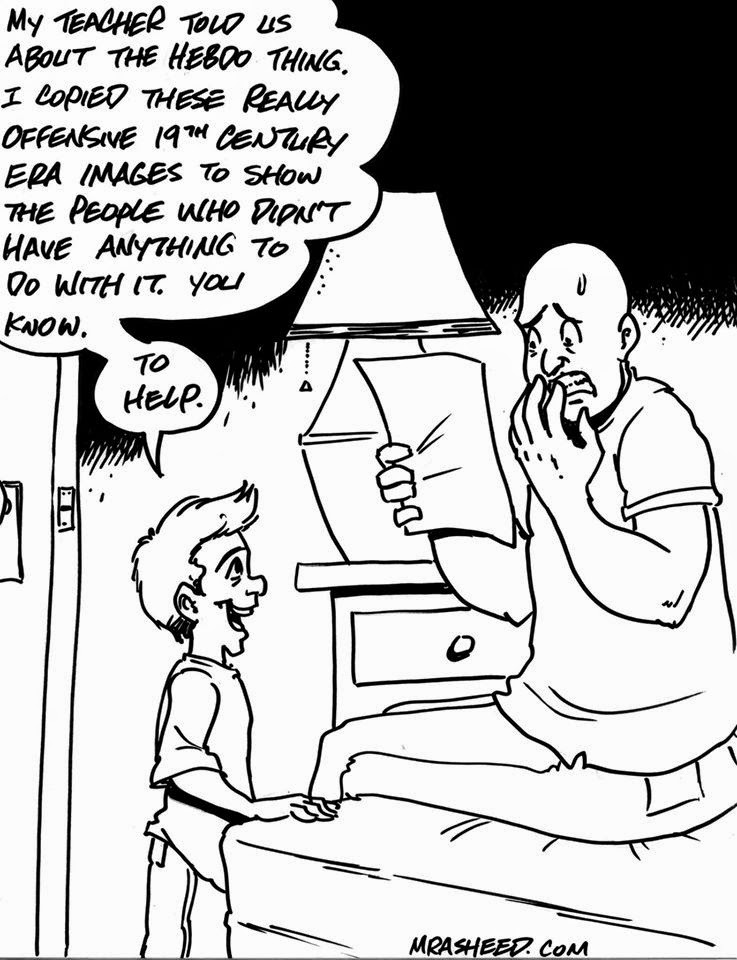 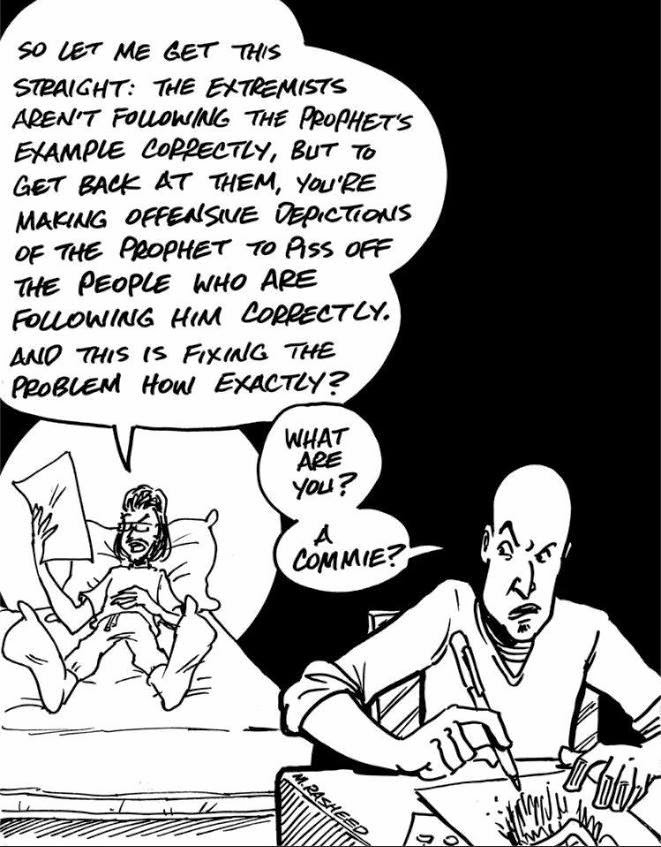 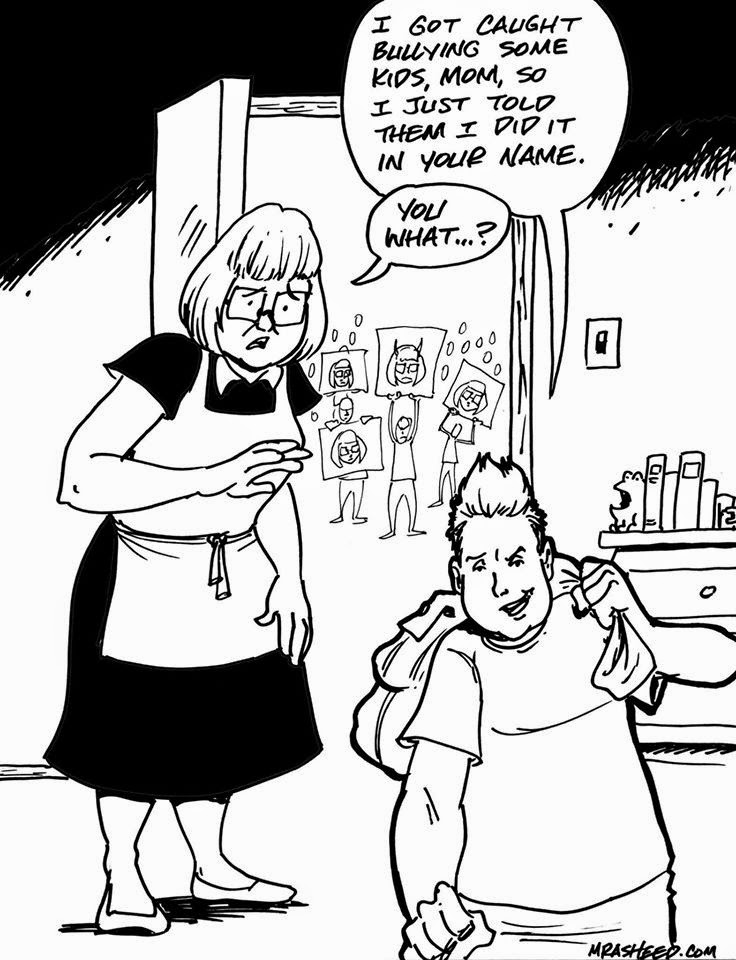 Muhammad Rasheed - Before I could post this last one, however, I found I had been kicked out of the group. Apparently I was kicked out of the cartoonists' cartoon posting group because I posted cartoons. lol I'm genuinely interested in the justification for it. I'm going to assume it was because they weren't hateful enough, nor slanted against Islam enough.

As you can glean from the content of my critique, the ones that were allowed to stay were pretty harsh. This was interesting, and ironic considering the entire point of the group's encouragement of the cartoonists to come together was to support Free Speech.  Some free speech is more free than others.  In a free society, is there anything worse than a thought monopoly?

Bakkah Rasheed-Shabazz - It's interestingly how that free speech group likes to call folks idiots when your free speech doesn't agree with their free speech. Why not disagree with the ideas instead of them resorting to attacking someone personally. The idea is not to silence the opposition, but to engage in intelligent, reasonable debate to follow the different ideas to their logical conclusion, which you do very well, Son.

Jerry Lee Brice - As long as people stay on point and debate the issue at hand, not clown each other for simply expressing opposing ideas concerning the topic, then it should all be cool.
When folks start to clown each other for having different ideas on one topic, is when it devolves into ad hominem attacks, or folks talking about "i have the freedom to express a negative opinion about you expressing an opposing opinion than mine...that gets to be annoying.
I always know that when people do that, they just don't like the idea that a fellow human being can in fact have an opposing opinion than them...and that's just a manifestation of ego.

Jerry Lee Brice - The people that got hooked and offended by the toons, are the ones that probably identified with the content.
They probably did not like the way they were being portrayed.

Jackals Home -  Now, this, I'm actually interested in. Not only because you're mostly right, but also the ways you're wrong are interesting.

I think you've got a pretty good handle on things with most of these cartoons. They're on point, you're perspective is valid, you've expressed yourself well, and I think made an especially apt artistic criticism that "mean-face man in a turban" isn't a particularly clever...anything. I like blasphemy, I know good blasphemy, and it's not good blasphemy.

I think your continuing reliance on radical factions of your bronze-age sect not being true scotsman is weaker, just because they'd say the same about you, probably, and this is one of the main complaints people like me have about religion. So we can ignore that.

I'd like to focus on the one where the moderate Muslim is holding a shed shut filled with extremists. Because I think it's the most wrong-headed, and it's wrong-headed in some interesting ways.

Jackals Home - Mainly it's wrong because it's not the job of moderate Muslims to "control" radical Muslims. And that's actually a really good thing, because you're shit at it. So I'm curious why you would imply that moderate Muslims have any possible control over the behavior of what you consider "fake" Muslims, the extremists in the shack? What's the implication there?

Because it kinda seems like the idea is that the moderates are somehow keeping the extremists successfully bottled up, and uh-oh, those nasty cartoons are gonna give them the rage-filled strength they need to overcome the moderate holding the door shut and oh, we can't be responsible for what happens next.

Jackals Home - Which is just a veiled threat. "Oh, I'm reasonable, I'm a good world citizen, I'd never to anything to harm people I disagreed with, but those guys, those guys in there, well, you know how they get..."

I thought you didn't have anything to do with those guys?

Jackals Home - What it all comes down to is that as long as there are people who are willing to murder other people for saying shit they don't like, or producing art they don't like, or being less religious than they would like, it's the job of the satirist to exemplify those things.

Because otherwise, violence becomes a reasonable and expected way to solve disagreements. The violent don't get their way just because they're violent. A recent article about this whole mess called it "veto power" over free expression, and that can't be allowed.

Muhammad Rasheed - I agree with you 100% about it not being his job to hold the shed shut. My intention was to show that he saw that the cartoonists were provoking the crazies again, so he ran over to hold it shut because of his foresight in recognizing the same thing that set them off before would probably set them off again. It wasn't his "job" but as a concerned citizen he tried to do "somethin'" however ineffective and feeble (that's why I made him so skinny).

Muhammad Rasheed - Jackals Home wrote: "I think your continuing reliance on radical factions of your bronze-age sect not being true scotsman is weaker, just because they'd say the same about you, probably, and this is one of the main complaints people like me have about religion. So we can ignore that."

This topic is pretty black & white to me: if the texts don't condone it, but the radicals do it anyway because they are upholding their traditions/cultures over the religion (which even non-violent traditionalists do over lesser matters routinely), then I don't see why I have to take ownership of it; it's literally "proud Arab traditionalist Muslim" versus "Black American Muslim." His "proud Arab traditions" which include misogyny, are more important to him than his Islam, but because he is an Arab, he will think his Islam is stronger than mine purely by virtue of him being an Arab. He's full of shit, and his radical mess is nationalist not religious. Reza Aslan did a great job of explaining that concept to a couple of anchors who insisted it was "the Muslim world" that was broken:  Reza Aslan Slams Bill Maher for Facile Arguments’ About Muslim Violence

Kenjji Jumanne-Marshall - With the events in Paris the matter of these images of the prophet have become an issue. Me personally: I feel like most images depicting him are flatly and obviously racist but unfortunately many people need to have the reality explained to them. My question is are there any valid statements that depict him as wearing a turban or the long white robe he is typically depicted in? My research shows me that he was described as have hair that fell to a length between his earlobes and shoulders which indicate to me that the turban was not customary for him. I have also found that his face was described as round and friendly but I digress. I'd appreciate your thoughts. I also respect the possibility that even indulging the matter may conflict with your beliefs and as such you are more than welcome to decline - just let me know. Thank you.

Muhammad Rasheed – There are a lot of hadith that describe what he looks like from many sources; some of it conflicting. In the end, we have an uncertain picture of what he looked like, but a significantly more accurate picture of how he behaved. He smiled very easily, and had white healthy teeth. We know this for sure. In fact, there are probably more hadith accounts of him brushing his teeth a lot than any other personal behavior of his.

Another thing that we know about the prophet for sure is that he was often described as lean/fit. The lifestyle they led in those days with all the walking and hands-on work made up the fit part, but the lean part came from the prophet always denying himself creature comforts. He had his well-known favorite foods sure, but he didn't over indulge. He would fast the month before Ramadan as well as Ramadan, and even on off months, he would fast every Thursday. So he definitely wouldn't be built chunky the way they depicted him on this new Hebdo cover.

Muhammad Rasheed - Well, considering the whole point of his mission was a demonstration to us of the proper behavior needed to please God, how he looked is irrelevant. It's a point that I personally rarely ever think about for that reason (and Jesus, too, for that matter). How we act is Big Picture; how we look is definitely narrow picture.

My rants against racism come from that very well, when the dominant racial group think they function from a higher moral ground than the "lowly brown people" they have so much contempt for, yet they prove incapable of acting inside of that same Big Picture mindset.  They only pretend to.

RESPONSE - "A Message to President Obama from a Former Muslim"
Posted by M. Rasheed at 2:38 AM