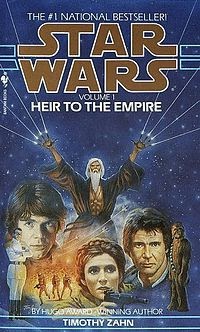 Muhammad Rasheed – Star Wars: Heir to the Empire, volume one of Timothy Zahn’s “Thrawn Trilogy,” was my introduction to the Star Wars expanded universe novels.  I remember being very excited when I saw it advertised in one of those book catalogs mailed out by the “buy 12 for a penny!” book clubs I subscribed to at the time, and I quickly added it to my next order.  It was the only book from the expanded universe I’ve ever read.

Heir to the Empire disappointed me mightily.  Zahn’s contributions to the Star Wars mythos included playing down the powers of the Force, building upon the administrative/mundane aspects of the Jedi Order, finding a way to nullify the Force rendering the Jedi helpless, and ripping off his most interesting character from an older far more interesting work.  In other words, he turned a property I was very fond of into everything I hate in modern fiction.  The villainous Jedi clone Joruus C'baoth character was strikingly similar to Jack Vance’s powerful and insane character Morreion, even down to his physical description, so it was difficult to think it was just a coincidence that these people also found this powerful and insane old character isolated on a distant world as a parallel original invention of Zahn’s.

Anyway, I found the book a chore to get through, and it left me with zero motivation to put myself through a similar torture to read part two. The Jedi are the sole reason I am a fan of the Star Wars franchise to begin with, and for an author to think I’d be excited to see them depowered offended me.  For me, sci-fi only has value if it is being used to turn humans into super humans, so of course Zahn’s approach would leave me flat.  This was back in the early ‘90s during my college days, and even today, mentions of the Star Wars expanded universe will cause me to involuntarily frown from my negative, single experience with it.  Today there are numerous books added to the expanded universe by many other authors, so the chances that there are some out there I would genuinely enjoy are probably pretty good; hopefully Zahn’s contribution wasn’t popular enough to make all other contributors follow his boring lead as a template.  Even still, with Heir to the Empire making such a negative impression upon me at a young age, it will probably take quite a while for me to willingly sacrifice the reading time to give another one a shot.

Oh, and then there's this: 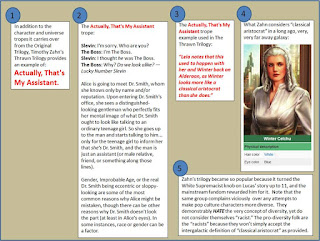 Basically Zahn turned the Star Wars universe into the functional equivelent of the sci-fi arm of the notoriously racially exclusive D&D universe, complete with full White Supremacist regalia. In my opinion that's the soul reason why the mainstream fans took such fierce ownership of Zahn's vision, and insisted the original creator make it canon.  Now that I've discovered that the rest of the Extended Star Wars novels have indeed used his work as the base foundation, I don't want anything to do with it.
Posted by M. Rasheed at 6:15 AM