The Worms That Invade Your Brain Found in This Food Favorite 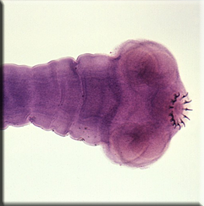 There are many forms of tapeworm, three of which can readily infect the brain. From a public health perspective, there's one in particular to watch out for. "It's mainly the pork tapeworm that's the main brain one," says Helena Helmby from the London School of Hygiene and Tropical Medicine.

The pork species, known as Taenia Solium, can infect humans in two forms. The first is by eating undercooked pork from infected pigs, resulting in taeniasis -- an adult worm residing in the intestine. The second, in the larval form, through contact with the feces of an infected pig or human, which can go on to infect many tissues. If the larval worm enters the nervous system, including the brain, it can result in a condition known as neurocysticercosis. Infection of this kind can often cause epilepsy once inside the brain. Almost a third of epilepsy cases in countries where the disease is native are people who have previously had neurocysticercosis, according to the World Health Organization.

Neurocysticercosis infection arises from poor sanitation and hygiene. "You can actually infect yourself," says Helmby, as poor hygiene, such as failing to wash your hands, could result in you eating the eggs of an adult worm living in your intestine. "Self-infection is common."

The global distribution of pork tapeworms is widespread with high numbers across Latin America, Africa and Asia, according to the World Health Organization. As a result of its higher prevalence and due to increased international travel, Gkrania-Klotsas has three patients in her care in Cambridge who have previously experienced neurocysticercosis.

Infections with pork tapeworms are common but treatable with antihelminthic drugs targeting the worm. Until now, treatment for Spirometra has been surgical, but the recent genetic insight from Bennett's team in Cambridge found that some drugs, such as praziqantil, which is used against schistosomiasis (snail fever), could have an effect. Certain drugs used against cancer were also identified as potential treatments.

Both Helmby and Gkrania-Klotsas are concerned about risks from increased international travel and the global food trade. "Food import and export is increasing and increasing risks of consuming infected goods," says Helmby, who feels there is a need for more vigilance with food inspection. She predicts more cases will occur in places like the United Kingdom where such infections have been virtually eliminated.

"I'm confident there will be more of this in the future," agrees Gkrania-Klotsas, who has seen patients infected without having traveled abroad. "People are getting infections without going anywhere."

Those who do travel, however, also need greater awareness when visiting regions where infections are commonplace. But if health teams are ready for the consequences, this rise can be controlled.

"We need to be able to treat these infections," says Helmby. "That's the challenge at the moment." A challenge where genetics researchers could prove invaluable, as their sequencing continues to reveal the secrets of these parasites.

SOURCE: The Worms That Invade Your Brain