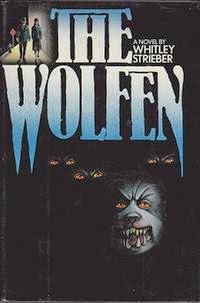 Muhammad Rasheed - This is one of my favorite stories of all time. The concept was absolutely brilliant, and like another reviewer mentioned, the movie completely missed the ball on this. Wolfen is the highest-evolved member of the dog family just as we are the highest-evolved primate. Feeding exclusively on humans, the Wolfen evolved parallel from us, and increased in mental capacity to match as their prey evolved, similar to the way the cheetah's speed evolved as his prey got faster. As our technology evolved to make us more than a match for any animal, our natural predator evolved his physical abilities to keep up. The Wolfen don't have an actual opposable thumb, but their paw evolved to mimic one (close enough). It can turn a door knob or throw a complicated latch that the cleverest family pet couldn't. They've demonstrated the ability to mimic the sounds of distressed humans or children to lure their prey into lonely areas and they have a complicated/sophisticated language. But most of all they have SPEED. They are fast enough to disappear from your sight as if they vanished into thin air.

With today's new CGI effects this would be the perfect time to redo that stupid movie and scare the heck out of people like they should have. And this time, no ecological speech snore-fests, please. 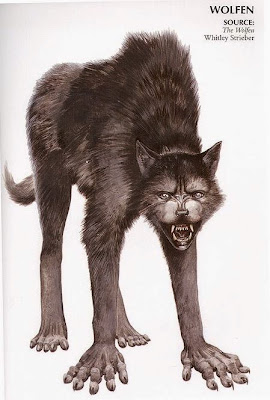 Muhammad Rasheed - That movie was garbage. The book was awesome. They didn't have the tech or the subtlety to make this into a correct movie in those days. Today they do. The team that's making these new Planet of the Apes reboot movies could knock this story out of the park on the silver screen.

Muhammad Rasheed - It could be genuinely terrifying.

Derek Mason - Been meaning to read this. Saw the movie as a kid, was scary, but then again, I was 5. Heard the book was 100 times better.

Muhammad Rasheed - The movie turned the story into a bullsh*t PSA for ecological awareness.

Derek Mason - Did they actually look like the above pic in the book ? Paws that look like human hands ?

Muhammad Rasheed - Not quite. They didn't have opposable thumbs, but their paws were described as "clever."  They were flexible enough to manipulate our tech well enough to get to you.

The movie just used regular wolves (with the leader of the pack a purest, snowflake white, because that's the color of leadership and stuff, of course: "White Power!") and said they were spirits of the earth that came to punish us for littering or whatever. Then an American Indian showed up and shed a single tear.

Muhammad Rasheed - It was garbage. Don't watch that stuff.

Muhammad Rasheed - In the book the Wolfen talk about how they feel about wolves and the other lesser dog species.

Derek Mason - Oh yeah, I know they were regular wolves in the movie, I meant did they have human like hands in the book. I heard they could climb apartment buildings

Muhammad Rasheed - Yes. The Wolfen are to the dog family what we are to the primate family. They are our natural predators, and their physical gifts evolved to match our technology. So although they don't actually have a hand w/thumb, their paw works like a hand, and can open locks and pretty much whatever our hands can do...

Derek Mason - Maybe even show the Wolfen as the basis for werewolf legends.

Muhammad Rasheed - Their faces aren't static like a dog's face; they actually do have lips and can express emotions with their faces. It comes across as ugly/horrifying/alien. Outside of their comparable intellect, their deadliest weapon is their great speed; they are so fast that they appear to vanish while you are looking at them.  For purposes of their own survival, their most important tool is the ability to hide among us, and let their knowledge fall into mere legend.

Muhammad Rasheed - That's exactly how they are presented in the book.

Muhammad Rasheed - They're just as smart as us, with their own language, etc., and the ancients thought they were people who transformed into beasts.

Derek Mason - Well, looks like I gotta visit amazon. Got to get this book.

Muhammad Rasheed - Barlowe did a decent job on the illustration above, but the face is still too static.

Derek Mason - You got me wanting a Wolfen comic. Would love to see the history of them.

Muhammad Rasheed - Before the modern tech era, we had a very different relationship with them.

Muhammad Rasheed - You were literally out-of-your-mind and suicidal if you went outside after dark, or wandered off all by yourself.

Derek Mason - Shit, the imagery you just gave me got me thinking twice about walking down this hallway to the kitchen for a glass of water lol

Muhammad Rasheed - Early in the story, the two detectives went into this abandoned building, and the lady cop heard this faint noise like an infant crying. She went to go and investigate, but this instinctual terror made her hesitate. Something in her DNA was remembering something...

Derek Mason - Now that's creepy. I want to see this on the big screen.

Muhammad Rasheed - In the ancient days, a "vampire" was a treacherous, homeless human that the Wolfen would recruit to coax people out of their houses. As his reward they would let him live as long as he continued to be useful, and even allowed him to feed off of their scraps. They had no use for such a relationship in modern days, and consider themselves wealthy -- feeding off of the numerous outcasts of our society.

Muhammad Rasheed - In the modern era, after we forgot that they were real, we hunted the poor wolf almost to extinction in a misdirection of that same instinctual terror. Meanwhile the real enemy was hiding along the path to the well, or using one of those clever paws to pull open the window to your basement...

Derek Mason - Are the Wolfen copyrighted creations of Strieber or general folklore ?

Muhammad Rasheed - Strieber's creation. His version of the werewolf myth.

Derek Mason - Damn, would've love to have used them in one of my projects.

Muhammad Rasheed - I used the basic concept of the ancient terror hiding among humanity as it feeds upon us in my Monsters 101 graphic novel series.  The Classic Horror general atmosphere of this book was a great inspiration for me.
Posted by M. Rasheed at 8:48 AM