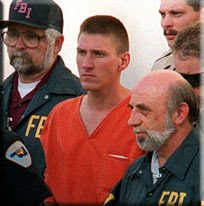 Muhammad Rasheed - I no longer think that the reason the government didn't beat up and arrest Cliven Bundy was only because he was white, and they wanted to be nice & gentle with him because white privilege. I think they kept their distance because of what happened the last time they attacked a similar "compound" of a similar demographic of criminal: The Waco Siege of the followers of David Koresh.

After that event, a very pissed off Timothy McVeigh took out his revenge by blowing up an Oklahoma federal building, killing a bunch of men, women and day care babies. The Oklahoma City Bombing was blowback for Waco. Now as you can see from the quotes in the image below, McVeigh sounded exactly like everyone you ever argued with over Trayvon Martin, Mike Brown, Tamar Rice, etc., using all the same talking points, and the authorities literally didn't even consider him "extreme." Ain't that a bitch? That's why they didn't attack Bundy's place, because it would've created a new wave of domestic terror, and with that "evil, Muslim, socialist, Kenyan in the White House trying to take all their guns," it probably would've been a whole lot worse. Timothy McVeigh is the patron saint of that crowd, and an attempt on Bundy would've created a shitload of McVeigh acolytes. 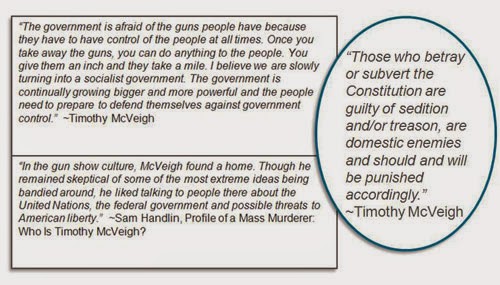