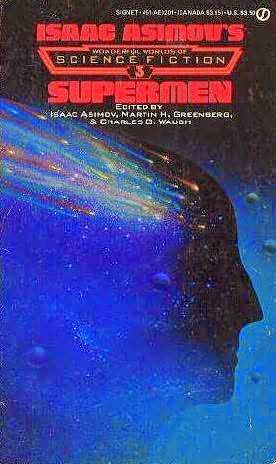 I finally got my hands on this intriguing-sounding paperback anthology, that had been on my Wish List for many years, and I was pleased to find I did indeed enjoy it a great deal.

Compiled and edited by Isaac Asimov and some others, it has twelve short stories, each featuring a super human being of some description. The oldest story was written in 1948 while the most recent was written in 1969. I thought the book was very cool overall, with some stories I liked more than others of course. I was primarily interested in the supermen themselves and was anxious to see how each author would handle the concept.

1.) Angel, Dark Angel by Roger Zelazny - The supermen in this story were highly advanced cyborgs in the role of assassins. They were pretty much coldly invincible in the story (as well as frightening) and no human could possibly be a match for them.

2.) Worlds to Kill by Harlan Ellison - This story had but one superman and he was a Planet Killer for Hire. Literally. He owned a world-sized technological fortress complete with his own alien servants, soldiers, highly-advanced super-weapons and a super-computer (A.I.). Physically he was Captain America/Punisher-level but he also had a great, brilliant mind that got him along well for untold centuries before his computer was built.

3.) In the Bone by Gordon R. Dickson - The superman in this story was actually an astronaut in the far future. He was the sole pilot of a remarkable space craft that was more like Iron-Man's armor, but much bigger and far more powerful.

4.) What Rough Beast by Damon Knight - The superman in this story was a middle-aged polish immigrant in early 20th century . He had the unrestricted ability to traverse through the unlimited alternate dimensions of the Multiverse. He could either go into any of them at will, or he could take specific objects or beings from any of them at will. For example, he could put a one hundred dollar bill on the table and then take a million of that one hundred dollar bill's counterparts-counterparts from the corresponding one million alternate realities and place them all next to it on his table. Such a feat could take him roughly 4-5 hours.

5.) Death by Ecstasy by Larry Niven - The supermen in this story are people with various psionic abilities... none particularly powerful... with the protagonist possessing a weak third "arm" made out of invisible psychic energy.

6.) Un-man by Poul Anderson - This supermen from this story are a secret army of clones, each working as a special, highly-trained agent for a secret government organization. They function during their greater mission as a single man, legendary in the role of the unkillable Un-man that can't be stopped. When you think you killed him he will be back to hound you once more! (Kinda like the 5 Chinese Brothers set-up.)

7.) Muse by Dean R. Koontz - In the future when mankind starts exploring other worlds, eventually they bring back these slimy, leech-like symbiotes that attach themselves onto a host's spine. They are huge and actually deform the hosts' clothing. They require some kind of mental energy as food in order to thrive and in return... they provide something SUPER. I can't tell you without messing up the tale, but it is fun.

8.) Resurrection by A. E. van Vogt - In the very far future, mankind's technology has achieved a state that can only be described as Cosmic Power. Completely doing away with machinery in their technological expression, these supermen freely manipulate the full force of atomic energy, gravity, the electromagnetic spectrum, space/time, etc. with the power of their wills alone.

9.) Pseudopath by Philip E. High - The superman in this story is a highly-trained soldier with "profiling" abilities so acutely well-developed, that combined with his impressive, Jet Li-level physical abilities, seems as if he has unlimited access to the inner minds of men.

10.) After the Myths Went Home by Robert Silverberg - The supermen in this story are another super-advanced, far future version of mankind. But these are a few eons before the beings in Resurrection by A. E. van Vogt and have little offensive capabilities. Instead they use their otherwise unlimited super-tech to freely manipulate the weather as easily as you rearrange your curtains, and even bring to life entities from the distant past that may or may not have actually lived... and sometimes both versions of an ancient being in both his/her true and legendary forms.

11.) Before the Talent Dies by Henry Slesar - The superman in this story is a telepath on Emma Frost's level of skill.

12.) Brood World Barbarian by Perry A. Chapdelaine - The superman in this story is a savage barbarian (who apparently looks like Fabio) from a world with higher gravity and much harsher living conditions. The creature is forced to fight other alien beings including his own world's brothers in gladiator games. Some parts of the slave harness he wears functions as impervious armor and he also has use of a magnetic energy-type weapon.
Posted by M. Rasheed at 7:56 AM